David Hopkin's Bantams secured a morale-boosting victory over Oxford United at the Northern Commercials Stadium to assist their efforts to climb up the table.

Two goals in less than three minutes midway into the first period from David Ball and Jack Payne set City on their way to a welcome 2-0 win against The U's.

Nathaniel Knight-Percival was given a straight red card late on after supposedly catching Sam Smith with a stray arm but, despite eight minutes of time added on, Hopkin's men dug deep to get themselves over the line.

On a day when over 19,000 were in the stands and City legend Stephen Darby made a popular appearance on the pitch at half time, Hopkin's Bantams certainly did their part to make it a thoroughly positive day for the club.

New signing Karl Henry was handed an instant debut after penning a two-month contract with the Bantams on Friday.

After being ineligible for Tuesday's Emirates FA Cup replay with Aldershot Town, Paul Caddis was brought back into the side for his first start at Valley Parade.

Partnering Eoin Doyle in attack, Kai Bruenker was also recalled as Hopkin made three changes in total from the side that started against Aldershot in midweek.

Although those in the home stands helped raise the volume levels pre-match, it was Oxford who seemed to make the more controlled start.

The visitors were coming into the contest on the back of a nine-match unbeaten run, and you could see the confidence gained from such a sequence of games as they tried to trouble Richard O'Donnell's goal early on.

A short corner from Oxford in the sixth minute saw Marcus Browne cross to the far post and Curtis Nelson head narrowly wide.

Browne was involved again soon after when he got the better of Caddis to enjoy a clear run from the left into City's penalty area.

The winger squared for Jamie Mackie, but the former QPR striker's effort for goal was scuffed and Henry could clear up field.

The busy Browne seemed to be at the heart of most Oxford's attacks in the early stages, with the winger this time being on the end of a chance fifteen minutes in.

Cameron Brannagan's cross from the left deflected into Browne's path in the box, but a sliding block from Caddis took the sting out of his shot and the ball bounced through to O'Donnell.

Just before the twentieth minute, Browne's fellow attacker James Henry got in on the act, firing in a low drive from just outside the box that O'Donnell pushed around the post.

In the build-up to Henry's strike, Anthony O'Connor brought down Mackie.

O'Connor was eventually cautioned for the foul - his fifth league yellow card of the season - meaning he will now miss next Tuesday's trip to Luton Town due to suspension.

Just over five minutes later, however, O'Connor and his team-mates had plenty to shout about as the Bantams took the lead from a corner.

Jack Payne's delivery into the box was flicked on by Doyle towards Ball, who headed for goal.

Ball's effort was pushed up into air by Oxford 'keeper Simon Eastwood but the ball then looped back down to earth, bouncing over the line and into the net.

The goal sparked joyous scenes in the populated home terraces, but better was to come for those in claret and amber less than three minutes later.

Doyle's shot into the box was blocked by Rob Dickie but the rebound fell kindly for Lewis O'Brien.

O'Brien squared for Jack Payne and the attacker, who spent a spell on loan at Oxford at the beginning of last season, fired home past Eastwood from close range. 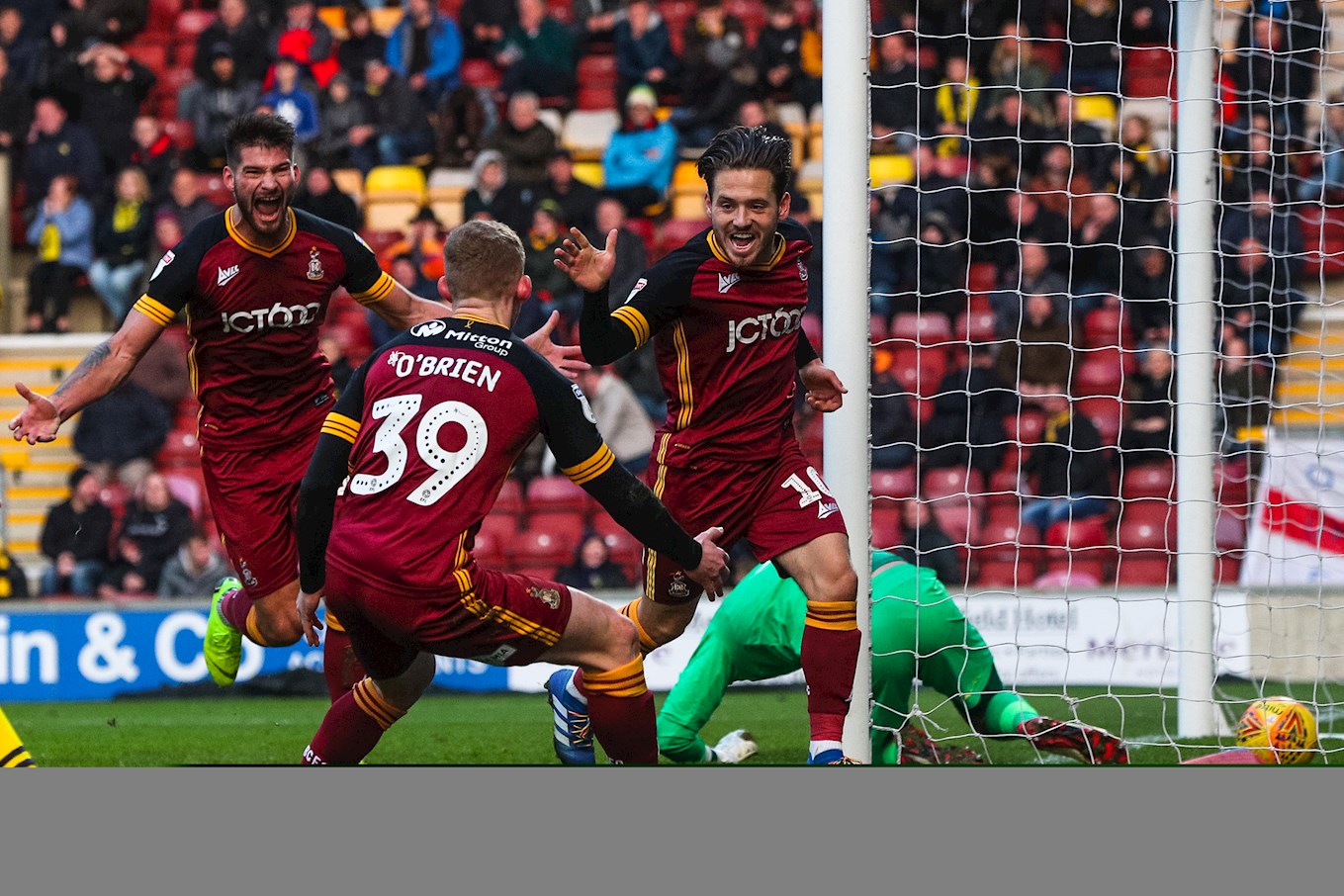 Goalscorer Payne was one of a number of City players to wear rainbow laces throughout this Saturday's fixture.

With football clubs throughout the country using this weekend to celebrate the LGBT community, the corner flags and fourth official's board at Valley Parade, plus the captain's armbands for both teams, were all decorated in rainbow colours.

After a slow start to the contest, City now had a real advantage in the game they could build on.

Amazingly, City thought for a few seconds they had netted for a third time ten minutes before the break but O'Connor was flagged offside.

Bruenker flicked on a Payne free-kick to give the Irishman a simple tap-in from close range, but the celebrations were cut short by the linesman's flag.

As Oxford looked to response before the break, Henry fired over from the edge of the box and Nelson volleyed at O'Donnell from a Browne free-kick.

Browne and Nelson nearly combined from another set-piece just before the break, but the centre half narrowly missed out on contacting with the testing delivery into the six yard box.

Nelson and his Oxford team-mates protested to referee Darren Drysdale that he was pulled back, but no spot-kick was given.

The half time break saw the ever-popular Darby enter the field to an outstanding reception from the home fans.

Darby was interviewed on-pitch by the club's stadium announcer, with the vast majority of the 19,000+ crowd staying in their seats to listen to the former right back detail plans of a fundraising match and charity foundation.

As he left the field, even City's substitutes - who were warming up on the pitch at the time - joined in with the warm applause for the 30 year-old. 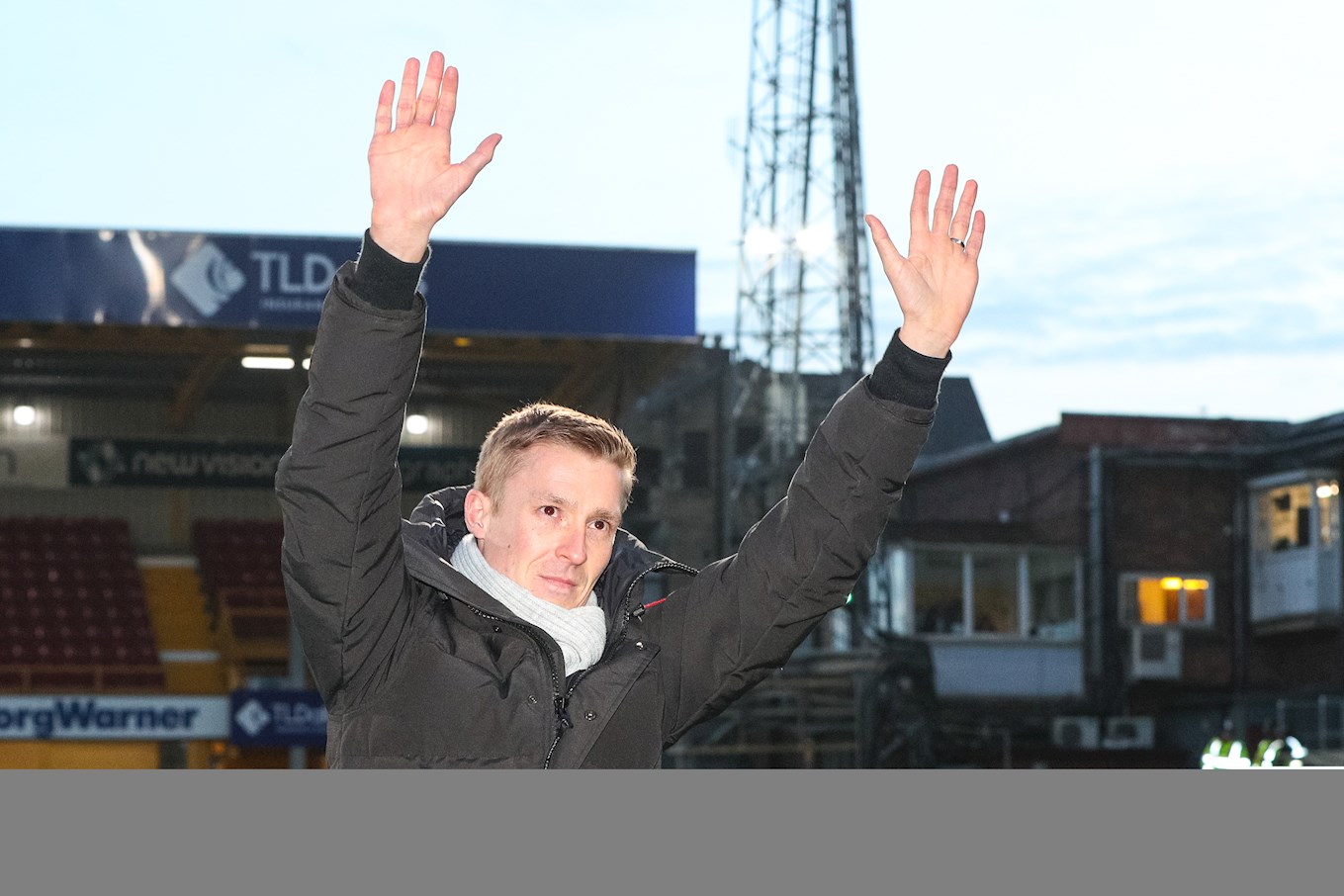 The second period started with two Browne set-pieces within three minutes of each other that looked to trouble City's defences.

O'Donnell, however, clung onto headers from Mousinho and then Nelson.

Browne himself fired over in the box from an angle nearly ten minutes into the second period.

Another Browne set-piece delivery had City under pressure again but Josh Ruffels headed into the side-netting.

Soon after, and for the second time in the afternoon, City saw a goal disallowed for offside.

Ball played a one-two with Payne before crossing for Lewis O'Brien to head home into the corner.

Any celebrations were cut short, however, as Ball was flagged for offside as he got onto Payne's return pass and crossed.

Payne then played Doyle into space inside the box minutes later but his low drive was held by Eastwood.

As City looked to kill off the game, Ball fired over following Lewis O'Brien's cross into the middle just past the hour mark.

Oxford hit back shortly afterwards, with Nelson firing over from a corner and then Henry having a shot from outside the box held by O'Donnell.

With the Bantams able to see the finishing line as the game moved into the final stages, Hopkin's men looked to slow things down and take the sting out of the match at every occasion.

Browne tried his luck from the edge of the box thirteen minutes from the end but the deflected drive bounced through O'Donnell.

In a final throw of the dice, the visitors made a triple substitution nine minutes from the end.

Cameron Norman, Luke Garbutt and Smith all came on for Oxford.

As the pair tangled for an aerial ball following Eastwood's kick forward, Smith fell to the ground due to contact from Knight-Percival.

Match official Drysdale was quick to produce a straight red card for the City defender, with the 31 year-old now in line to serve a three-match ban unless the Bantams can win an appeal against the dismissal. 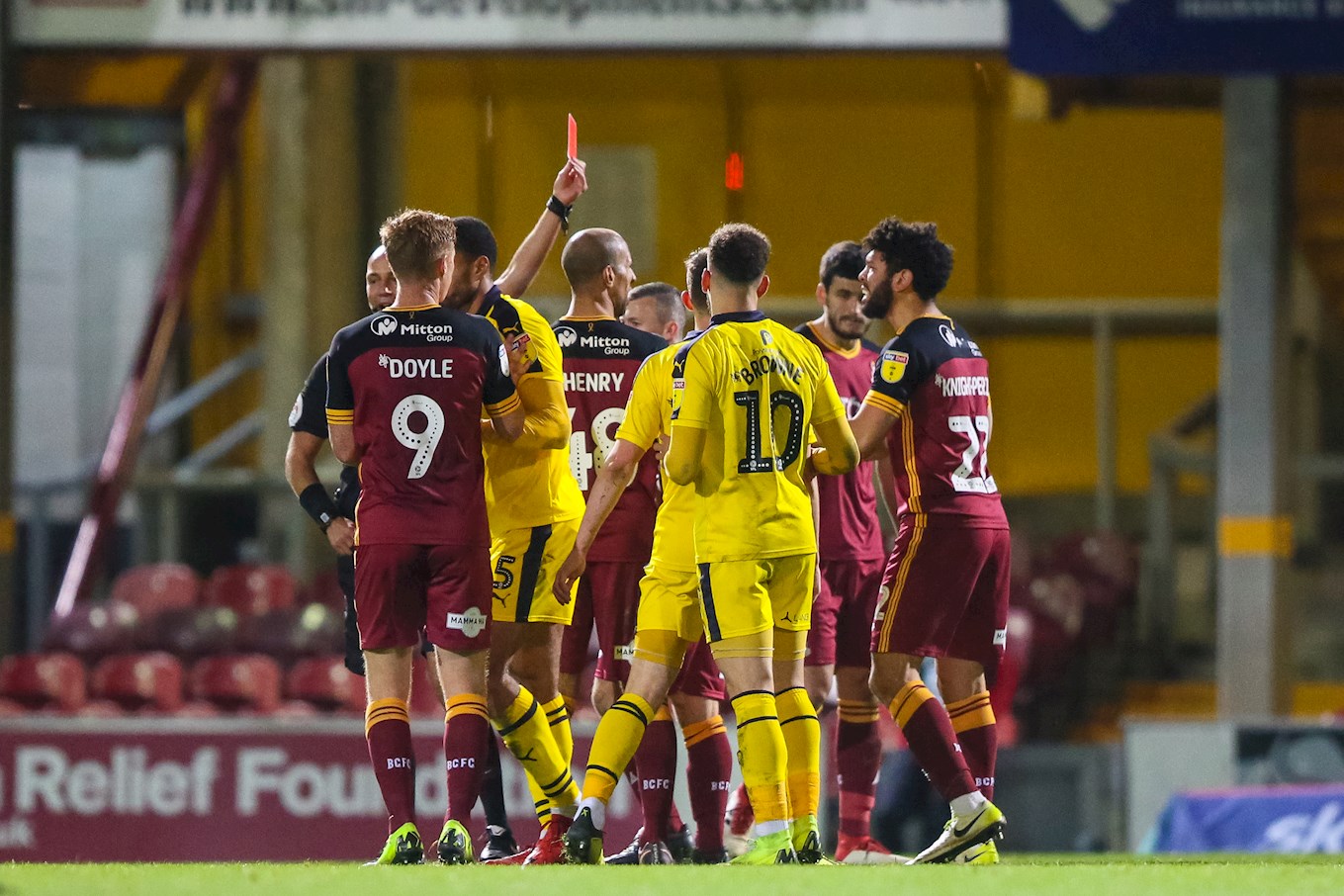 With the second period seeing injuries affecting Knight-Percival, Bruenker and Ball - plus the stoppage for the red card - as many as eight minutes were added on at the end of the match.

Oxford had plenty of territorial pressure in the extended over-time, but the closest they came to scoring was when Nelson hit the base of the far post with a header.

City overcame that brief scare, though, to see out the remainder of the match.

A surging run forward from sponsors' man of the match Adam Chicksen won City a free-kick in Oxford's half deep into injury time to virtually secure the victory.

The Bantams were able to keep the ball in Oxford territory from the resulting free-kick in the final seconds; the final whistle being greatly received by those in the City camp on and off the pitch.

Match line ups, stats and action from the Oxford United fixture can be found via our Match Centre - HERE.