David Hopkin's battling Bantams threw everything they had at table-topping Portsmouth this Saturday - but a twelfth-minute winner from former Bantam Gareth Evans claimed a narrow 1-0 win for the league leaders.

Portsmouth skipper Evans, who featured for City between 2009 and 2011, crashed home in the box for the game's only goal following Ronan Curtis' low centre from the left.

Despite the current sizable gap in league positions between the two sides, in truth, there was precious little between Hopkin's men and their pace-setting visitors.

The Bantams certainly matched Portsmouth stride for stride at Valley Parade, with City arguably worthy of at least a point for their efforts.

Although they were reduced to ten men seven minutes from the end of normal time when the returning Adam Chicksen received a second yellow card, City could have actually snatched a share of the spoils twice in injury time.

The Bantams' first added time opportunity came when Hope Akpan burst through on goal but fired over with only Portsmouth shot-stopper Craig MacGillivray to beat.

David Ball then curled a whisker past the near post from a free-kick just outside the area seconds from the end.

Chicksen, who was starting his first game since a leg fracture in early September, was one of three changes made by Hopkin to his starting XI.

Ryan McGowan and George Miller, both of whom missed the Gillingham game last weekend through suspension, were recalled as well, with Connor Wood, Thomas Isherwood and Jack Payne all dropping to the bench as a result.

Ahead of the match, the Northern Commercials Stadium fell silent as part of the forthcoming Remembrance Commemorations. 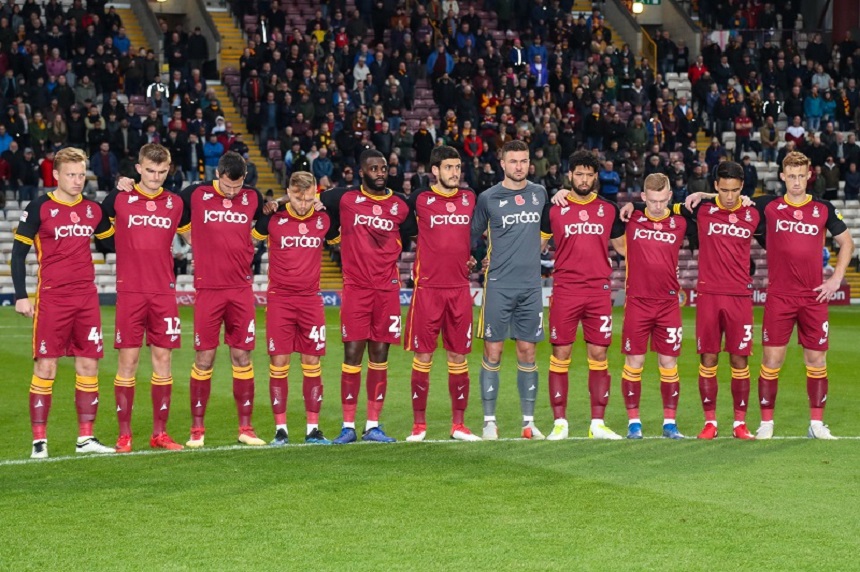 The pre-match minute's silence was also in place to honour those who lost their lives in the recent Leicester City tragedy.

Attacking to The Kop, City started the match at some pace when proceedings did get underway.

The impressive and hard-working Lewis O'Brien forced an early save out of MacGillivray after he'd been teed up by Ball in the box.

Sadly for the Bantams, though, their early match momentum was halted when Portsmouth took the lead with their first real chance of the game.

Curtis caused the danger with a low centre into the middle and the on-rushing Evans arrived on time to smash the ball high into the net at pace past O'Donnell.

The goal understandably gave Portsmouth a shot in the arm, and the visitors did enjoy a threatening period thereafter, but City, to their credit, roared back into the contest once again.

Eoin Doyle's driven ball into the six yard box midway through the half looked to have set up George Miller for a tap-in but a brilliant Jack Whatmough tackle cleared behind for a corner. 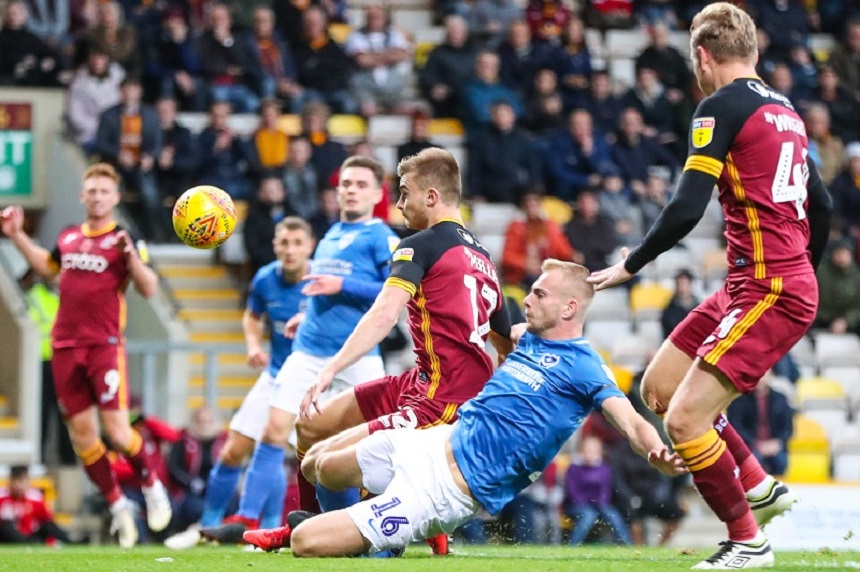 At the other end, Portsmouth striker Oli Hawkins scooped a shot over following Tom Naylor's headed knock-on into the mix from a Evans free-kick.

Ben Thompson then saw a deflected strike from outside the area minutes later held by Richard O'Donnell, but City came back once again soon after.

From a long O'Donnell kick forward, the ball bounced into the path of Miller but his half-volley from just inside the box was parried by MacGillivray.

Josh Wright was quick onto the loose ball, but his clipped delivery into the middle was held by the Portsmouth shot-stopper from just underneath his own crossbar with Doyle lurking behind.

Miller looked to turn provider for Doyle six minutes before the break, but the one-time Portsmouth striker's shot from just inside the box trickled through to MacGillvray.

Portsmouth ended the first period with a half chance of their own when a brilliant through-ball from distance by Ben Thompson put the dangerous Lowe into space behind Chicksen in the box.

Lowe's centre into the middle tried to pick out Hawkins but Nathaniel Knight-Percival, who produced a number of vital clearances through the game, was on hand to kick clear.

Pompey edged early proceedings after the break, with two testing Thompson deliveries into the box in quick succession early into the half forcing hurried clearances by Akpan and McGowan.

As City still looked to find their feet after the interval, Curtis was given a chance to test O'Donnell after McGowan was cautioned for a foul on Matt Clarke twenty-five yards out.

Curtis' free-kick hit the City wall, however, with the Portsmouth attacker then looping a header into O'Donnell's gloves shortly afterwards following Anton Walkes' far post cross from the right.

Chicksen joined McGowan in the referee's book for the Bantams minutes later when he tugged back Lowe just outside the area.

With the match reaching the hour mark, City were able to step things up and they began to really take the game to their high-flying opponents.

O'Brien's cross from the left gave O'Connor a great sight of goal but the defender's free header bounced through to MacGillivray.

Payne was brought into the action soon after, and he and Doyle both saw shots blocked by Whatmough soon after the loanee attacker's introduction off the bench.

Whatmough's second block from Doyle's effort resulted in a Bantams corner, but McGowan could only head comfortably over from Payne's resulting delivery.

Although the Bantams were looking stronger as the half wore on, City's defence still had to be wary of the potential threat from Portsmouth's forwards.

Evans saw an effort from outside the box held by O'Donnell later in the half.

The attacker was then replaced shortly after that chance for midfielder Ben Close as Portsmouth's thoughts turned towards seeing the game out.

In response, Hopkin turned to Kai Bruenker off the bench for Doyle, and the German striker was inches away from making a serious connection with Chicksen's threatening delivery into the middle barely a minute or so after coming on.

That testing cross from the left by Chicksen would be the defender's last opportunity to help City's cause for the day, though, as he was sadly given his marching orders minutes later. 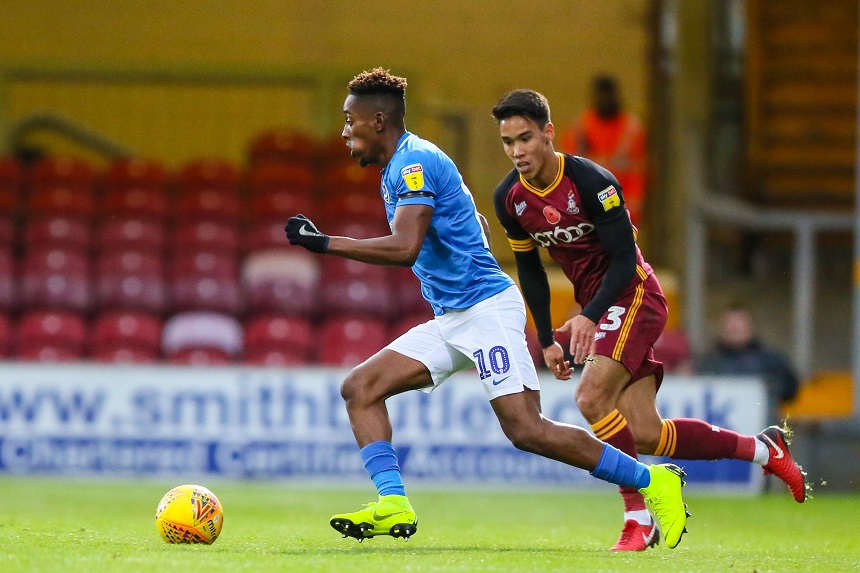 Chicksen was given his second booking of the afternoon for bringing down Lowe as the troublesome attacker looked to surge past the City full back down the right wing.

Despite going down to ten men, however, City weren't deterred.

Following a scramble in the Portsmouth box just before the end of normal time which saw Ball and sub Sherwin Seedorf having shots kicked away, Hopkin's side engineered two golden chances to claim a deserved share of the spoils.

Winning possession of the ball deep inside Portsmouth's half, Akpan surged towards the visitors' penalty area.

After playing a one-two with Seedorf, Akpan found himself in the box with only MacGillivray to beat.

Akpan elected to shoot but his first time left-footed effort sailed agonsingly over the bar.

The City midfielder and a number of his team-mates slumped to the ground in frustration following that chance, but there was still one opening left for the Bantams.

O'Brien drew a foul from Thompson just outside the box in the final knockings of injury time.

Ball stepped up to take it; curling a right-footed strike towards goal.

The effort had MacGillivray scrambling across his line but the shot flashed narrowly wide of the 'keeper's near post.

The referee's final whistle sounded just seconds later to leave the Bantams with a defeat on their hands that their efforts throughout the game probably didn't merit.

Match updates, line ups and stats from the Portsmouth game can be found via our Match Centre - HERE.