David Hopkin's hard-working Bantams secured a deserved share of the spoils at Peterborough United this Saturday thanks to a 1-1 draw at the ABAX Stadium.

Anthony O'Connor gave City the half-time advantage with his fourth goal of the season; the skipper firing home from inside the box in the eleventh minute.

Peterborough substitute Ivan Toney levelled the game up for the hosts just after the hour mark - although the striker looked to be in an offside position when he netted.

The incident was a hard one for Hopkin's men to take after a battling and defensively-solid display from the men in claret and amber.

Despite the disappointing nature of Peterborough's leveller, City's committed display against one of the sides tipped to finish at the top end of League One this season will give the Bantams some confidence in their efforts to move up the division.

Fresh from signing for the club on Friday, new signing Paul Caddis was brought straight into Hopkin's starting XI.

This Saturday's game was Peterborough's nearest home match to the Remembrance weekend, meaning both sides were joined on the pitch pre-match by former members of the armed forces.

As there was at Aldershot last weekend, an army bugler was also on hand to play a rendition of 'The Last Post' as those within the ABAX Stadium fell silent to remember the fallen.

Once the action got underway, despite pre-match expections from many neutrals of a comfortable home victory, it was actually Hopkin's side who enjoyed the better start.

Debutant Caddis tested Peterborough goalkeeper Aaron Chapman with a left-footed curler from just inside the area in only the fourth minute.

Five minutes later, David Ball hooked the ball into the six yard box but Ryan Tafazolli put behind for a corner with Eoin Doyle lurking for a tap-in.

City were threatening again less than sixty seconds later when Ball - one of a number of players to put in a tremendous shift throughout the game - caused problems in the home defence.

The Rotherham loanee twisted and turned inside the area, with the ball eventually landing at the feet of Jack Payne in a good shooting position. 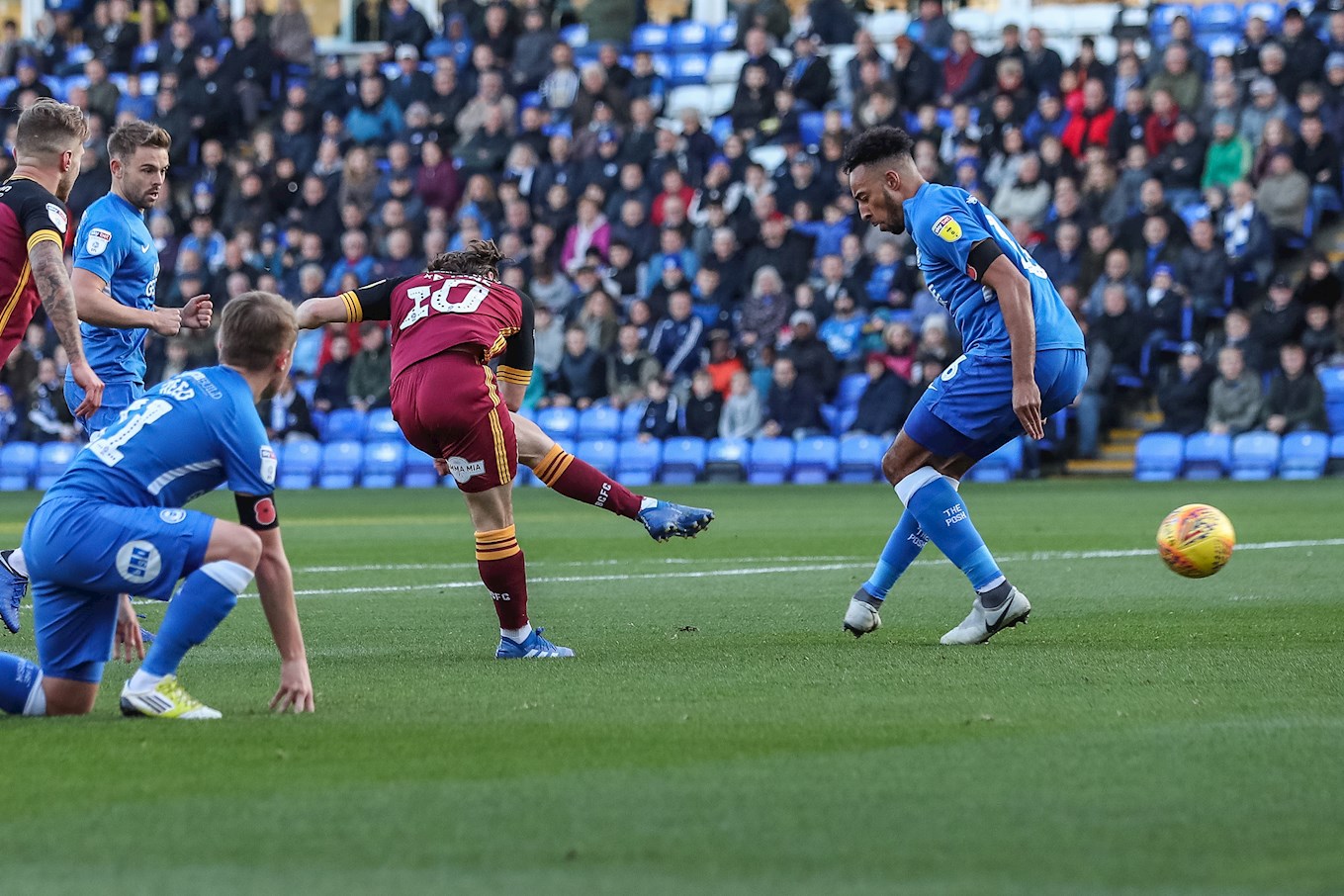 Payne fired low for goal but the effort was somehow turned behind by the legs of Chapman.

As City kept the pressure on, though, they did find a way past Chapman from their next attack.

A cross from the left by Adam Chicksen was headed down into the mix by Nathaniel Knight-Percival.

Hope Akpan picked up the ball on the edge of the area before driving into the box and teeing up O'Connor.

Positioned around eight yards out, O'Connor managed to fire low past Chapman by his near post to move him level with Payne at the top of City's scoring charts.

For all of the hosts' possession, however, City's fight and endeavour - coupled with their organisational skills - were restricting them to precious little in the way of actual chances on goal.

RIchard O'Donnell didn't have too many saves to make in the opening period, although it must be noted that the 'keeper's handling was superb when dealing with a number of testing crosses into his area.

The City shot-stopper did have to gather up when Tafazolli headed a Louis Reed free-kick goalwards, but the downward header was comfortable for the Bantams number one.

Reed himself tried to test O'Donnell when a cleared Marcus Maddison corner fell his way, but the midfielder's ambitious volley from outside the box flew wide of the near post.

With Peterborough pushing more and more men forward at this point, two crosses towards the end of the half from left back Tyler Denton tried to cause some concern in the CIty defence.

Denton's first testing delivery found Jamie Walker in the area but his effort for goal was blocked by Knight-Percival.

A glance at the substitutes' bench for Peterborough showed the strength of their squad currently at Posh boss Steve Evans' disposal, and the home manager was quick to use those resources ahead of the restart.

Attackers Toney and Siriki Dembele were introduced before the beginning of the second period as Evans looked to put some pressure on City's well-drilled defensive ranks.

Tricky winger Dembele was involved in an early chance for Peterborough after the interval when he crossed for Matt Godden, but O'Connor was on hand to kick clear.

At the other end, Knight-Percival got his head onto a Ball corner but Chapman rose up to cling onto the effort.

With City looking to relieve the pressure at this stage, Payne went on a lung-bursting run from deep that eventually ended in Reed earning a booking after fouling the City loanee.

Payne went for goal himself with the resulting free-kick but the effort struck the wall.

The talented Maddison was certainly a proving a threat for Peterborough, especially with his in-swinging deliveries into the box from the right.

Two such crosses within a minute or so of each other briefly looked to threaten for Posh but chances for Denton and Godden were gathered up by O'Donnell.

Peterborough kept the pressure on as the clock ticked past sixty minutes, but City were still looking solid and limiting the home side in terms of clear sights of goal.

Sadly for the Bantams, though, that would soon change as Peterborough levelled things up in controversial circumstances.

A long ball forward from Maddison found Toney in space behind CIty's backline.

The sub attacker looked in an offside position but the flag stayed down and the former Newcastle striker fired home past O'Donnell.

Hopkin was enraged on the touchline following the decision, with referee Scott Oldham going across to have a word with the seething City Head Coach.

With the volume levels raised in the home stands now following the goal, City could have easily been in for a difficult remainder of the match.

To their credit, however, they stuck to their principles and continued with their praiseworthy efforts to get something from the match.

City nearly had a chance to get back in front soon after when Ball played Payne into space in the box.

Payne wasn't able to quite get a shot away while under pressure from Rhys Bennett, though, and the ball eventually bobbled through to Chapman.

As Peterborough went back on the attack, a free header by Tafazolli from a Reed corner was blocked away by Knight-Percival.

The remaining twenty minutes of the match saw the pattern of play remain fairly consistent; Peterborough enjoying terroritorial dominance but City holding them off and looking to cause problems themselves on the counter-attack.

Payne enjoyed two sights of goal in the latter stages of the contest but both efforts from just outside the box were blocked.

The final sighter of the game actually fell to the Bantams as well.

A cross from George Miller, a second half replacement for Doyle, was cleared out as far as fellow sub Jim O'Brien but the midfielder, who replaced Akpan shortly after Peterborough's leveller, shot comfortably over from outside the box.

All in all then, a positive point and display from the Bantams, and plenty of encouragement ahead of big week of cup and league action for City at the Northern Commercials Stadium. 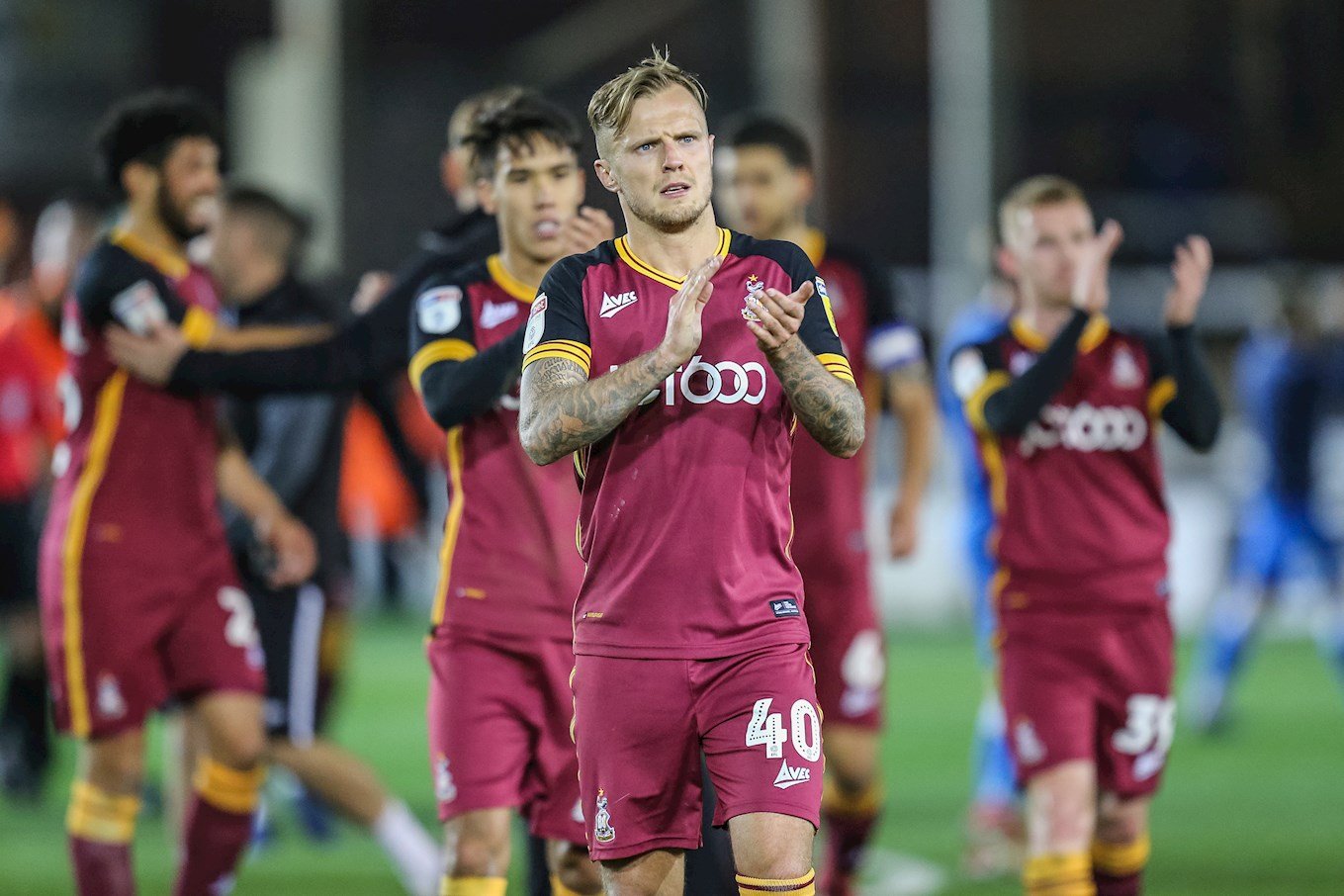 Match stats, line ups and updates from the Peterborough can be found via our Match Centre - HERE.