Bantams striker George Miller was dismissed in controversial circumstances as City's second half efforts proved in vain in a 4-2 home defeat to Coventry City at the Northern Commercials Stadium this Tuesday evening.

Following two early goals from Jonson Clarke-Harris and Conor Chaplin, Coventry found themselves with a strong advantage at the interval.

City skipper Anthony O'Connor pulled one back for the Bantams after the break, but further Coventry goals in the second period from Jordy Hiwula and Tom Bayliss but the Sky Blues back in the driving seat.

Despite those blows, City kept going, however, and O'Connor netted again later in the half for his second of the night.

David Hopkin's men thought they had set up a dramatic finale when Miller converted from close range just before the start of injury time, but the goal was disallowed for handball.

Miller was given his marching orders for the offence, reducing City down to ten men and realistically ended the Bantams' chances in the game.

On first glance, the decision to dismiss Miller for handball looks harsh, with the forward seemingly chesting the ball into the net.

Sadly for Hopkin's men, Ryan McGowan will also miss this Saturday's trip to Gillingham after collecting his fifth league booking of the season during the Coventry encounter.

Hopkin made two changes to his side from the weekend contest with Rochdale; the fit-again Hope Akpan coming into the side for his first start since injured his shoulder in early September and Nathaniel Knight-Percival replacing the injured Kelvin Mellor.

Following the defeat at the hands of Rochdale three days earlier, City were understadably in need of a fast start as they looked to bounce back.

Unfortunately for the Bantams, though, they were up against a Coventry side looking for their fourth straight win.

Clearly full of confidence then, Coventry took the lead in just the second minute.

From a Michael Doyle corner, Hiwula headed on and Clarke-Harris was on hand to convert from just yards out with a header of his own.

Clarke-Harris could have doubled his tally for the evening soon after from a Junior Brown cross from the left, but Richard O'Donnell produced a superb reaction save to tip the striker's header onto the post.

There was little O'Donnell could do minutes later, however, as Chaplin did manage to stretch Coventry's lead.

The attacking midfielder beat the City shot-stopper by his near post with a brilliant curling free-kick from just outside the box.

As City tried to response from the early double blow, McGowan thought he had won a penalty when he went down in the box under a challenge, but match official Mr Ross Joyce waved play on.

The penalty call was City's second in the early stages of the match following a similar incident involving Lewis O'Brien with the game at 1-0 to Coventry. 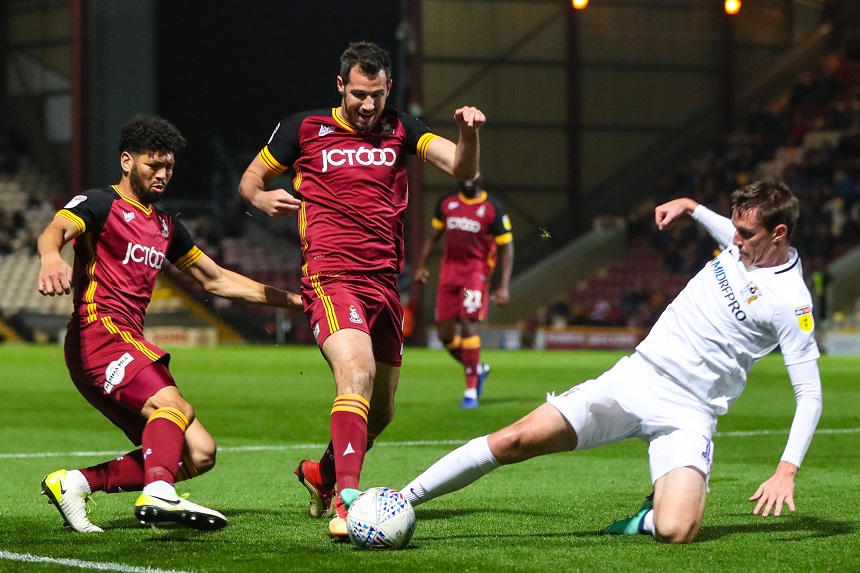 Undeterred by their early set-back, the Bantams continued to push on and try to get themselves back in the match.

Josh Wright and Jack Payne both went for efforts on goal from just outside the box shortly after the half hour mark.

McGowan then looped a header over from a Connor Wood cross into the box soon afterwards.

Coventry did have one further sighter before the break when right back Dujon Sterling was played into space inside the area.

The defender went for goal but his rising angled drive flashed wide of O'Donnell's far post.

The final scoring chance of the half fell to the Bantams, though, when Miller was tripped on the very edge of the box.

Payne took the free-kick himself - driving a delivery into the area at pace - but Miller could only head wide as he stretched to reach the ball.

Attacking to The Kop, Hopkin's side will have been looking for a positive start to the second period, but it was actually the visitors who started the better.

A Michael Doyle corner delivery flashed dangerously across goal just minutes after the break, while Luke Thomas saw a low effort from just inside the box held by O'Donnell soon after.

Coventry could have actually struck just before the hour but O'Donnell denied Clarke-Harris for the second time on the night; the City shot-stopper producing a fine reflex save to repel a downward header from the striker after a Sterling cross from the right.

That save looked all the more important shortly afterwards when the Bantams netted for the first time on the evening.

Lewis O'Brien's cross into the box from the left flank was flicked on by O'Connor and the defender's effort looped into corner of the goal past a rooted Lee Burge. 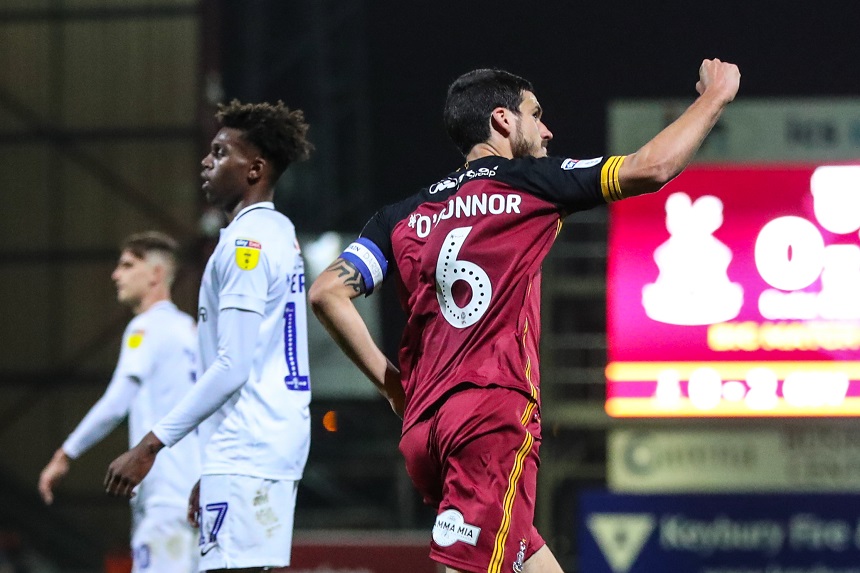 The goal understandably gave City fresh life, but they were sadly stung just minutes later when Coventry hit them on the counter-attack.

Chaplin played Hiwula into space inside the Bantams' half of the pitch and the former City loanee burst into the box and confidently finished low into the far bottom corner past O'Donnell.

Coventry then grabbed a fourth goal twenty minutes from the end.

Tom Bayliss strode to just inside City's penalty area before finishing low into the bottom corner, beating O'Donnell's dive to his left.

That goal seemed to have put the game to bed in favour of the Sky Blues but, to their credit, City gamely kept battling on.

Hopkin's men were able to pull another goal back twelve minutes from the end of normal time - again, with O'Connor getting himself on the scoresheet.

From a McGowan long throw-in into the box, Coventry could only clear as far as the City skipper, who fired a half-volley into the ground from the edge of the box that then bounced up off the turf and found the net via the underside of the crossbar.

Sadly for City as they looked to build another fight-back, Alex Jones, who had earlier replaced Eoin Doyle as a second half substitute, was brought off for David Ball due to an apparent hamstring injury.

Regardless of the Jones injury blow, though, O'Connor's second goal once again gave City some hope, and things could have got even better for them in the eighty-eighth minute.

A Payne cross from the right was sliced across his own goal by Coventry sub Jordan Thompson.

Miller was on hand to convert from close range, seemingly bundling the ball home with his chest from just yards out.

Just as City began to race back to the halfway line to force a quick restart, however, their goal celebrations were cut short.

The goal was disallowed by Mr Joyce, with the match official deeming that Miller had indeed handled the ball into the net.

The supposed handball actually led to the striker being dismissed after receiving a second yellow card of the match.

The incident left City with only ten men going into five minutes of injury time and realistically ended the Bantams' chances of getting anything from an incident-filled fixture.

Match line ups, stats and updates from the Coventry game can be found via the Match Centre - HERE.