Two late penalties from visitors Rochdale condemned the Bantams to a 2-0 home defeat in Sky Bet League One this Saturday.

With City pushing for victory going into the final ten minutes or so of normal time, Rochdale were awarded a spot-kick when Anthony O'Connor brought down Ian Henderson inside the box.

Henderson slotted home the resulting spot-kick to give Rochdale a vital advantage - but the drama wasn't over just yet.

George Miller, who had earlier seen an effort in the first half blocked on the line by Henderson, looked set to equalise for the Bantams when he was played through on goal just before the beginning of injury time.

The striker was denied by Rochdale 'keeper Brendan Moore, however, with Dale then given another penalty in the final seconds of the match.

Lewis O'Brien's under-hit back-pass was seized upon by Stephen Dooley, who was then brought down in the box by Richard O'Donnell.

As before, Henderson converted the resulting spot-kick to confirm the win for the Lancashire side.

Following the defeat at Accrington Stanley last weekend, Bantams Head Coach David Hopkin made three changes to his side for the visit of Rochdale to Valley Parade.

The aforementioned Miller joined David Ball and Josh Wright in being promoted back into Hopkin's starting XI.

Nathaniel Knight-Percival and Kai Bruenker moved down to the bench as a result, with attackers Jordan Gibson and Alex Jones also named on City's list of substitutes.

Knight-Percival was soon to be involved in the action, though, after an unfortunate injury to Kelvin Mellor.

After two early chances for Rochdale via Callum Camps, Mellor was forced off sixteen minutes in after being caught by Jordan Williams as he looked to clear up field.

The right back actually had to be stretchered off in the end, with the defender suffering a suspected broken toe. 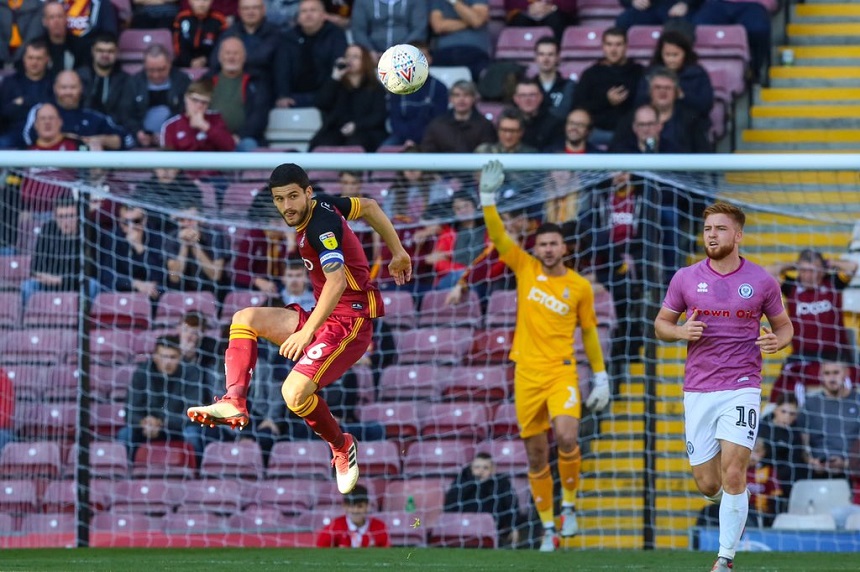 The break in play and the slight change in personnel for the Bantams - Ryan McGowan moving to right back following Knight-Percival's introduction - seemed to affect City perhaps understandably more than Dale.

As play resumed, Williams poked an effort just wide from the edge of the box minutes later.

Matty Done then saw a shot from outside the area superbly pushed away by O'Donnell soon after.

In a fairly evenly-contested first period, Dale continued to edge things in terms of chances created as the half progressed - Henderson, Done and Dooley all threatening on occasion - but things were still in the balance going towards the interval.

Four minutes before the break, however, City could have snuck ahead from a set-piece situation.

Miller fired for goal but his effort was blocked on the line by an alert Henderson.

There was still time in the period for Rochdale to engineer one first chance of the half, but a stretching Ryan Delaney narrowly missed out on connecting with Henderson's header on towards the far post.

The first scoring opportunity of the second period also fell into the path of Rochdale; Camps was found in the box by Done but the midfielder's strike was blocked behind by a combination of McGowan and O'Connor.

Dale continued to create the better openings in the early stages of the second period, with Henderson hitting the woodwork from a offside situation and Williams seeing a shot blocked from deep inside in the box.

Henderson was involved in another opening just before the hour mark when his free header from a Dooley wide free-kick delivery into the box was held by O'Donnell. 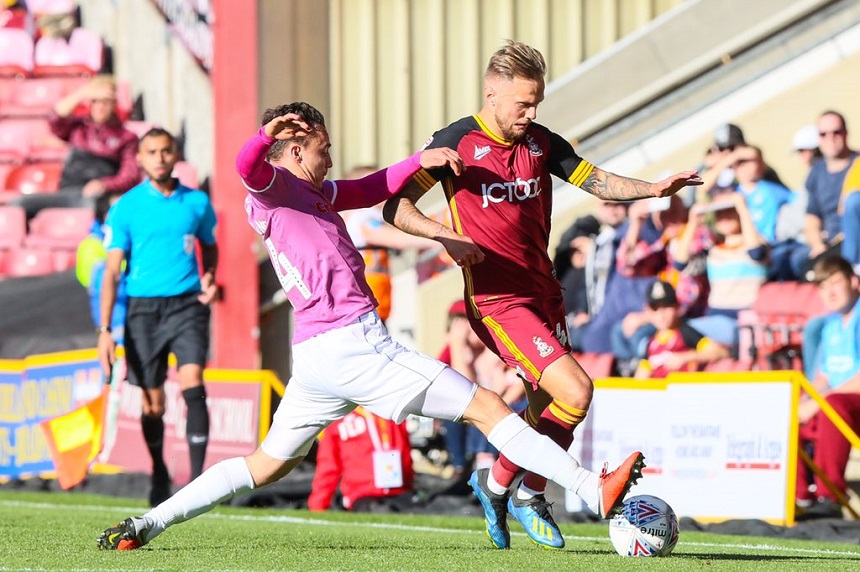 At the other end, Lewis O'Brien saw a low drive from outside the box held by Moore, but Henderson threatened once more minutes later when his header for goal from a Kgosi Ntlhe cross was superbly tipped over by O'Donnell.

The Bantams seemed to be in need of an boost at this stage, and it appeared to come when Jones was introduced for Ball twenty minutes from the end.

Seconds after coming on, Jones' low cross into the box interested both Miller and Payne but the pair saw shots blocked.

From City's very next attack, an Eoin Doyle flick on played Miller into space in behind Rochdale's defensive lines.

Miller tried to fire past Moore but the 'keeper repelled the striker's effort from just inside the box, with the ball then looping up and eventually dropping onto the roof of the net.

City's tails were up now, and Payne had two further shots blocked following a McGowan long throw-in into the box.

With the game beginning to look more open at this stage and Rochdale trying to respond to the City pressure, Done curled narrowly wide of the far post with a strike from just inside the box.

Miller, who seemed to be at the heart of all of City's key chances, then saw a rising strike from outside the box at the other end brilliantly pushed over by Moore at full stretch.

Just as City began to wonder whether they could perhaps go on and sneak a hard-fought win, Hopkin's men were dealt a hammerblow.

Taking the ball off the toes of O'Brien, Henderson drove forward into City's penalty area before being brought down by O'Connor.

The Dale skipper took responsibility with the kick and coolly sent O'Donnell the wrong way to give the visitors the lead with less than eight minutes of normal time left on the clock.

Hopkin's response to seeing his side going behind was to bring on Kai Bruenker for Doyle.

As City looked for a way back into the game following the penalty set-back, Wright fired at Moore with a first time striker from the edge of the box.

Less than a minute or so after that effort from the midfielder, City saw themselves on the end of a golden chance to level things up.

Payne's ball in behind gave Miller the chance to run clear on goal.

With only Moore to beat, Miller tried to put the ball between the 'keeper's legs but the shot-stopper stood strong to make the vital block.

Moving into injury time, City were still creating chances, with McGowan heading narrowly over from a Wright cross.

As City pushed men forward in the final seconds, though, Rochdale were able to seal the game via a second penalty of the afternoon.

Lewis O'Brien tried to play the ball back to O'Donnell, but Dooley latched onto the loose pass and proceeded to try and round the City shot-stopper in the box.

O'Donnell was adjudged to have brought down the Dale midfielder, earning the City custodian a booking and the visitors another penalty.

Again, Henderson made no mistake to convert his second goal of the afternoon and virtually seal Dale's win.

That victory was actually confirmed seconds later with the full time whistle from referee Ben Toner as City restarted the match.

Match line ups, stats and updates from the Rochdale game can be found HERE - via our Match Centre.