David Hopkin's battling Bantams were denied a share of the spoils as Sunderland secured a 2-1 victory from an incident-filled encounter at the Northern Commercials Stadium.

Sunderland led at the break when Josh Maja deflected in a strike from Lee Cattermole midway through the first period.

Anthony O'Connor levelled for City with his first goal of the season early into the second period, but the visitors were back in front just two minutes later via Jack Baldwin.

The game could have turned on its head in the sixty-sixth minute when Sunderland skipper Max Power was given his marching orders for an off-the-ball incident inside the box.

Power's foul resulted in a penalty for the Bantams, but Jack Payne's spot-kick was saved by former City 'keeper Jon McLaughlin.

The Bantams pushed for another equaliser in the remaining period of the game, but Sunderland did a professional job of hanging onto their advantage.

City's frustrating day was complete halfway into seven minutes of injury time when Sean Scannell was given a red card for reacting to something after giving a foul away.

With Eoin Doyle still injured after missing the midweek win at AFC Wimbledon, Hopkin brought Payne and David Ball back into his starting XI for the visit of arguably League One's biggest club by some distance.

Clearly buoyed by that recent success in the capitial, Hopkin's men started on the front-foot against their much-fancied opponents.

Scannell saw a second-minute drive held by McLaughlin from the game's first chance.

Minutes later, Scannell fired over two testing crosses in quick succession but the Sunderland defence eventually managed to clear their lines as City players looked to get shots in.

Sunderland, who also enjoyed an early chance through Maja, slowly began to have more of a say in the contest.

A stretching Jerome Sinclair then just missed out on reaching a testing Chris Maguire delivery into the six yard box from a wide free-kick soon after.

Sunderland did take the lead twenty-one minutes in, but there was a touch of controversy about the goal.

McGeady's cross into the box was headed down into the path of Cattermole.

The industrious midfielder's drive for goal flicked off Maja before nestling into the corner of O'Donnell's goal.

The nearby City players appealed that the final touch off Maja came via his hand but the goal stood.

At this stage, Sunderland were beginning to show some of the undoubted class they have within their ranks.

As Sunderland looked to pull the strings, City had to be disciplined in their defending, with threatening crosses from Maguire and Maja both needing to be cleared.

It wasn't all one way traffic, however. Payne's low drive from outside the box just before the half hour mark whistled narrowly past McLaughlin's near post.

For all Sunderland's pushing and probing as well, City actually enjoyed a promising chance to equalise shortly before the interval.

From a Scannell cross into the box, Nathaniel Knight-Percival headed on and George Miller fired just over with an acrobatic overhead kick from close range.

Despite Sunderland beginning the second period with a testing effort from McGeady that was pushed away by O'Donnell, City did level things up seven minutes after the interval.

Kelvin Mellor's long throw-in into the box was headed on by both Ryan McGowan and Miller before O'Connor behind them crashed home from close range. 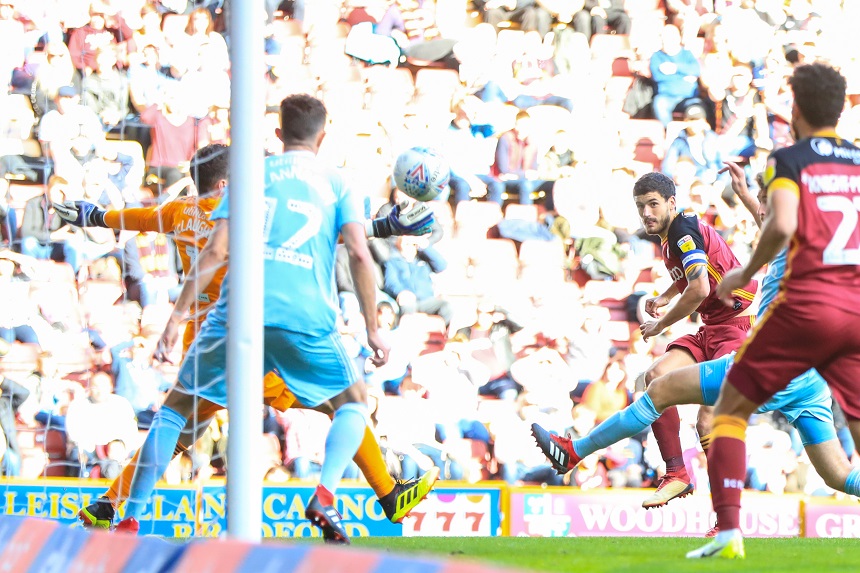 The goal understandably brought joyous scenes in the home stands, but sadly that joy wasn't to last too long.

Just two minutes later and with City still on a high from O'Connor's leveller, Sunderland fired themselves back in front.

The Bantams were unable to properly clear a Maguire wide free-kick delivery into their box and Baldwin was on hand to fire low into the far bottom corner past O'Donnell's dive.

Sunderland seemed to sense blood at this stage, and two big blocks were required shortly afterwards to keep City in the game.

Power burst clear into the box on the hour mark but O'Donnell denied him with a vital save.

Four minutes later, Tom Flanagan lept up to reach a Maguire corner but his header was cleared off the line and onto the bar by Knight-Percival.

Despite those near misses for Sunderland, though, the game could have swung massively back in City's favour not too long after.

As Sunderland looked to clear the danger from a Mellor long throw-in into the box, referee Anthony Backhouse blew up for a foul in the Bantams' favour.

Power was given a straight red card for an apparent kick on McGowan and City were awarded a penalty.

As he did on Tuesday at Wimbledon, Payne took responsibility for the kick but unfortunately this time his effort was saved; McLaughlin guessing right to make the important block.

The rebound fell back to Payne but he seemed to struggle to get the ball out of his feet and Flanagan was able to get back and scramble behind for a corner. 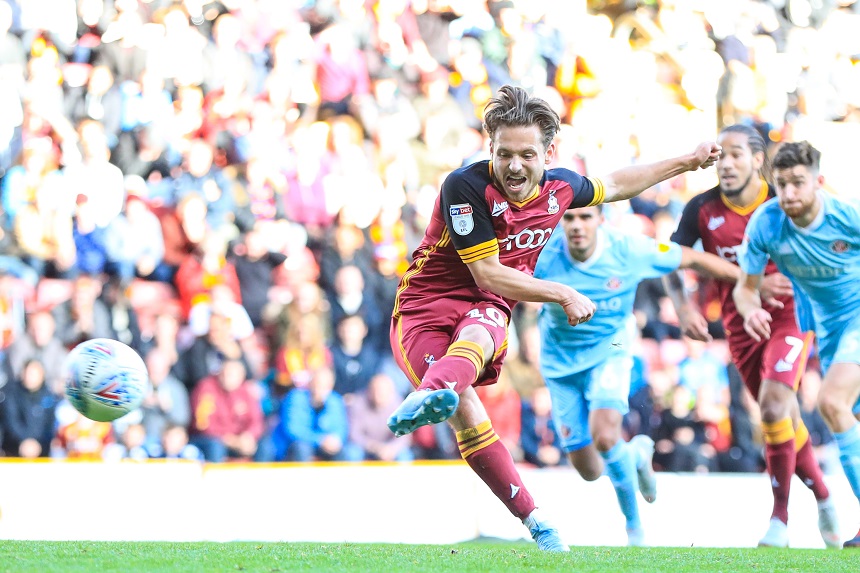 Payne could have redeemed himself shortly afterwards but his effort from distance whistled just over the bar.

Now down to ten men, Sunderland made their intentions clear by taking off three attacking players for midfield and defensive options as the half progressed.

In response, City introduced Jordan Gibson, Kai Bruenker and Sherwin Seedorf off the bench in different stages of the second period in an attempt to claim something from the match.

The Bantams were pushing and pushing in the latter stages - forcing Sunderland back into their own half - but the visitors were doing a good job of running down the time.

Winning numerous throw-ins and free-kicks, Sunderland used all their experience and knowledge to edge them closer to the finishing line.

Payne did have one opportunity in the final minute of normal time but his low drive from just outside the box was tipped around the post by McLaughlin.

City laid siege to the Sunderland goal in the lengthy period of added on time, with O'Donnell going up for two corners that the visitors cleared.

The Bantams' efforts to snatch a late leveller were dealt a blow, however, when Scannell was given a red following an altercation with Honeyman after fouling the Sunderland sub.

On another day City's effort could have resulted in Hopkin's side taking something from the match, but sadly it wasn't to be for the Bantams.

For match updates, match stats and line-ups from the Sunderland game, visit our Match Centre - HERE.