David Hopkin's Bantams were left to rue several first half missed opportunities as City eventually suffered a heavy 4-0 loss to Gillingham at the Medway Priestfield Stadium.

Tom Eaves (2), Regan Charles-Cook and Elliott List all netted for the Gills after the break, with Eaves hitting the woodwork and having a penalty saved by Richard O'Donnell in the second period.

In a true game of two halves, City dominated the opening half and probably should have been at least one goal up at the interval.

Jack Payne, Lewis O'Brien and Josh Wright all went close with chances before the break.

Eoin Doyle missed a great opening to score from just yards out and David Ball had a goal disallowed following a tight offside call.

Ball was one of two enforced changes made by Hopkin for City's trip to Kent.

With Ryan McGowan and George Miller suspended, the Bantams' Head Coach brought Ball back into the side and gave a first league start to Thomas Isherwood.

Isherwood began the game at left back, meaning Connor Wood shuffled across to right back.

Although the end result was clearly a very hard one for City to take, they flew out of the blocks from the very first whistle at the beginning of the match.

Neat play from Wright on City's right flank saw O'Brien played into space in the box just two minutes in.

As the ball rolled loose, a watchful Luke O'Neill then had to be on hand to clear from right in front of his own goal with Doyle looking to pounce.

O'Neill needed to be alert again in another similar situation ten minutes later when Holy fumbled a cross from Wright.

This time it was O'Brien lurking as the ball bounced free, but once more the Gillingham defender hacked away.

City threatened again from another Wright cross later in the half when the midfielder stood up a delivery towards the far post.

Doyle headed down into the mix but Gills skipper Gabriel Zakuani crucially kicked away just ahead of an on-rushing Ball.

The openings kept coming for the Bantams. A sliced clearance by Zakuani from a O'Brien cross resulted in a City corner.

Payne's initial delivery was cleared, but the ball came back to the City number ten and he eventually forced Holy to push behind at his near post thanks to a fierce drive from a tight angle.

At the other end, aside from an early effort from Billy Bingham, Gillingham's efforts on goal were being restricted to wayward strikes from outside the box by the likes of Brandon Hanlan and Mark Byrne.

With City still looking on the front-foot and continuing to play some eye-catching football as the game passed the half hour mark, Hopkin's men went close on two occasions to breaking the deadlock.

Firstly, Payne's deflected drive from just outside the box seemed to be heading for the corner of the goal after wrong-footing Holy.

The Gillingham 'keeper somehow stuck out a hand in time, however, to make a great reaction save.

As City kept the pressure on, they went even closer just seconds later.

O'Brien's driven ball into the six yard box found Doyle in space in the middle of goal.

The City striker looked set for a close range tap-in, but unfortunately the Irishman couldn't quite get his feet set as O'Brien's low cross came to him at pace.

Coming after a Charles-Cook effort for Gillingham from outside the box had rolled wide of O'Donnell's goal, City then engineered another promising scoring opportunity.

Ball's wide free-kick delivery into the box found an unmarked Wright but the midfielder's free header was straight at Holy.

City did eventually get the ball in the net six minutes from the break, but the effort was ruled out for offside.

Shortly after Hanlan had fired an acrobatic effort wide from inside the Bantams penalty area, City thought they had taken the lead when Hope Akpan flicked on a Payne corner delivery and Ball headed in at far post from close range.

Any Bradford celebrations were cut short, though, when the linesman on the far side shot up his flag. 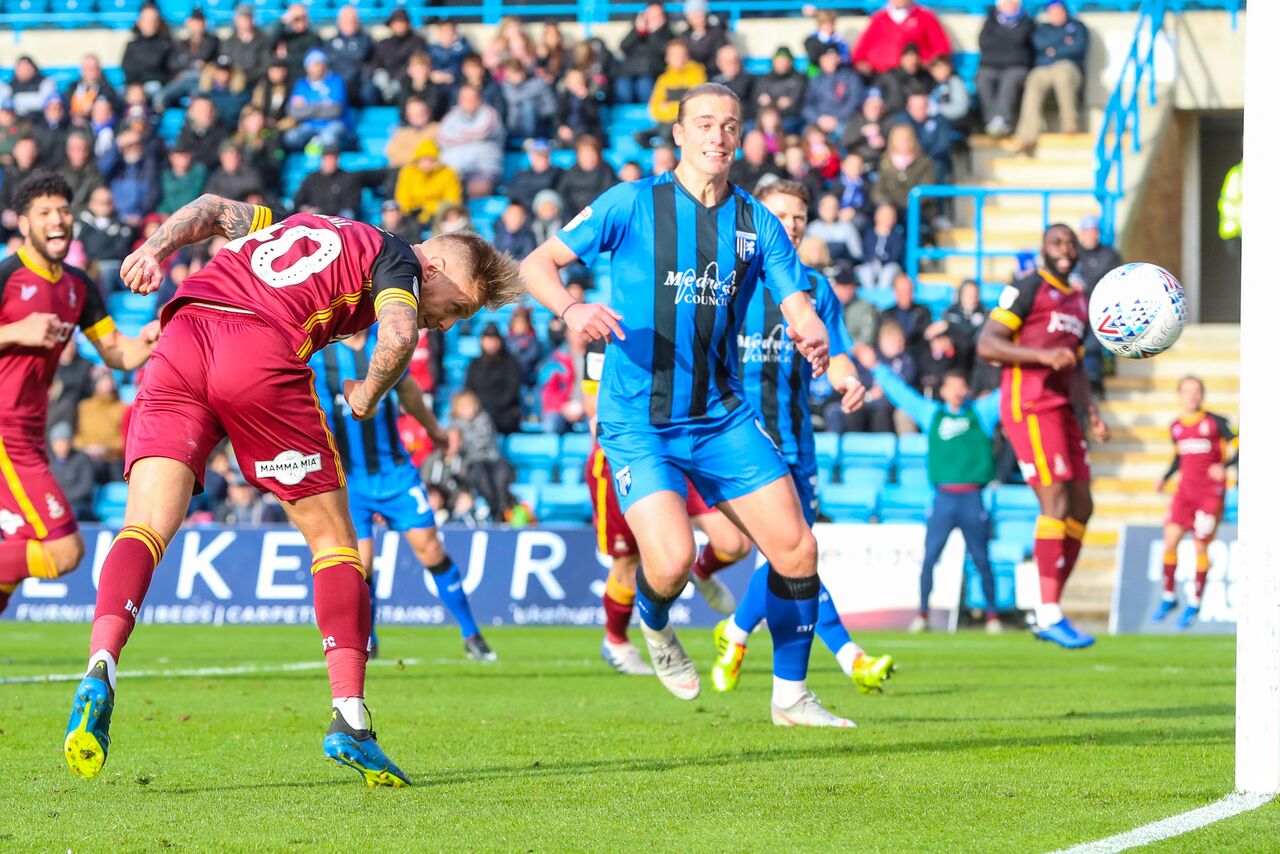 Eaves headed over from a decent position in the Bantams box soon afterwards, but City were quickly back on the attack just a minute or so later.

With the interval approaching, Gillingham nearly registered an barely-deserved opener just on the stroke of half time.

Nathaniel Knight-Percival got an important touch, however, on a goal-bound shot from Max Ehmer after a free-kick had fallen kindly to the German defender in the Bantams box.

After looking so bright in the opening period, City would have been aiming for more of the same as the second half got underway.

Sadly for City and Hopkin, though, it was Gillingham who made the better start after the break; taking the lead with less than three minutes of the half played.

Charles-Cook moved inside from the left and away from Wood before curling in a fierce strike from just inside the box that beat the dive of O'Donnell.

City tried to respond from the shock of going behind, but Wright saw an effort from a tight angle inside the box pushed away by Holy at his near post.

Wright himself tried to turn provider ten minutes after the break; his cross from the right finding Payne in the middle but the attacker's header was straight at Holy.

Gillingham were given a chance to double their advantage when they awarded a spot-kick with just over an hour gone.

Wood was penalised and cautioned after supposedly raising his arm in the box to block a goal-bound free-kick from O'Neill from just outside the area.

Eaves took responsibility for the kick but O'Donnell guessed right to make the all-important stop.

The big striker still had a bit to do but he confidently finished past O'Donnell with a fine left-footed strike into the far top corner.

After off-target efforts for City from Ball and Akpan in and around the box, Gillingham were able to net a third goal of the afternoon twenty minutes from the end.

Despite more than one attempt to do so, City weren't able to clear the danger from inside their box and substitute List, who had only come on for the Gills three minutes earlier, nipped in to fire home into the roof of the net.

A match that had started with so much promise for the Bantams was unfortunately now beginning to seriously unravel.

List fired narrowly wide of O'Donnell's far post with an angled drive from inside the box later in the half.

Gillingham then struck the woodwork seven minutes from the end of normal time.

List's low centre into the six yard box seemingly put the ball on a plate for Eaves but the stretching striker could only send a rising effort up onto the bar from close range. 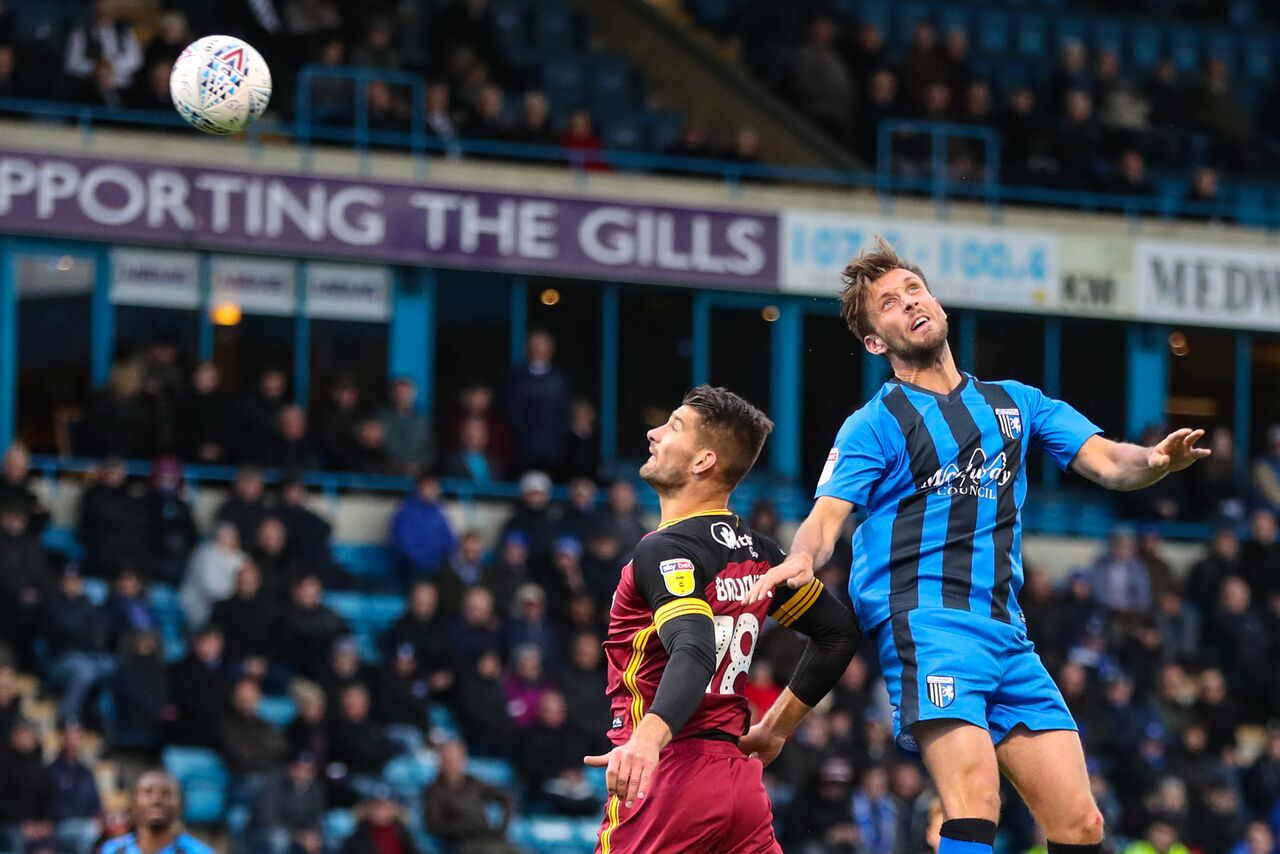 Sherwin Seedorf - one of three City second half subs along with Kai Bruenker and Jordan Gibson - tried to claim a consolation goal for the Bantams late on, but his angled effort from inside the box was repelled by Holy.

Barry Fuller then hacked clear the loose ball from in front of his own goal just ahead of Anthony O'Connor.

City's nightmare second period was sadly completed in the first minute of injury time when Eaves registered a fourth for Gillingham.

The giant striker, who had headed a cross from List narrowly past O'Donnell's far post minutes earlier, left the City shot-stopper with no chance when he headed home from close range following Fuller's inviting cross from the left.

After such a difficult and disappointing defeat for the Bantams, City will have to dust themselves down quickly and regroup ahead of next Saturday's visit of table-toppers Portsmouth to the Northern Commercials Stadium.

Match stats, line ups and updates from the Gillingham game can be found via the Match Centre - HERE.