David Hopkin's Bantams were forced to settle for a share of the spoils after being held to a goalless draw by Bristol Rovers at the Northern Commercials Stadium.

After an early effort by Rovers' Ed Upson from the edge of the area that hit the post, City enjoyed virtually all of remaining clear scoring chances in the game.

George Miller hit the post in the first period after running through on goal, while Sean Scannell also struck the woodwork after the break after being played in by Jim O'Brien.

Eoin Doyle tried to fire home on the rebound following Scannell's near-miss, but the striker's effort was blocked on the line by Tony Craig.

Doyle appealed for handball by Craig - with replays seeming to suggest the ball did strike the defender's hand - but nothing was given by the match official.

Hopkin's side did eventually get the ball in the net roughly fifteen minutes from the end but Miller's strike from inside the box was chalked off for a marginal offside decision.

The Bantams chief made three changes to his starting XI from the side that began Tuesday's Checkatrade Trophy encounter with Everton U21s.

Doyle, Ryan McGowan and the fit-again Kelvin Mellor returned to the team, with Jordan Gibson keeping his place in the line up to earn his first home league start.

Jack Payne was named on the bench, but Nathaniel Knight-Percival missed out altogther through illness.

For the second league match in succession, City's players warmed up and entered the field of play wearing the special 'Number 2 Darby' shirts in support of the former Bantams defender Stephen Darby.

The shirts will now be signed by the City squad and sold for charity.

Although City ultimately ended the contest the more likely scorers, it was actually the visitors who looked the greater threat in the opening stages.

Along with Upson's strike that was touched onto the near post by Richard O'Donnell, Tom Nichols threatened twice with two headers within the first ten minutes of the match.

The Bantams slowly came more and more into the match, however, and they easily could have taken the lead midway into the half.

Tom Lockyer's sliced clearance just inside his own half from a Scannell forward pass gave Miller the chance to burst clear into the box.

Despite recovering defenders on his tail, Miller fired for goal but his effort slammed against the base of Jack Bonham's far post. 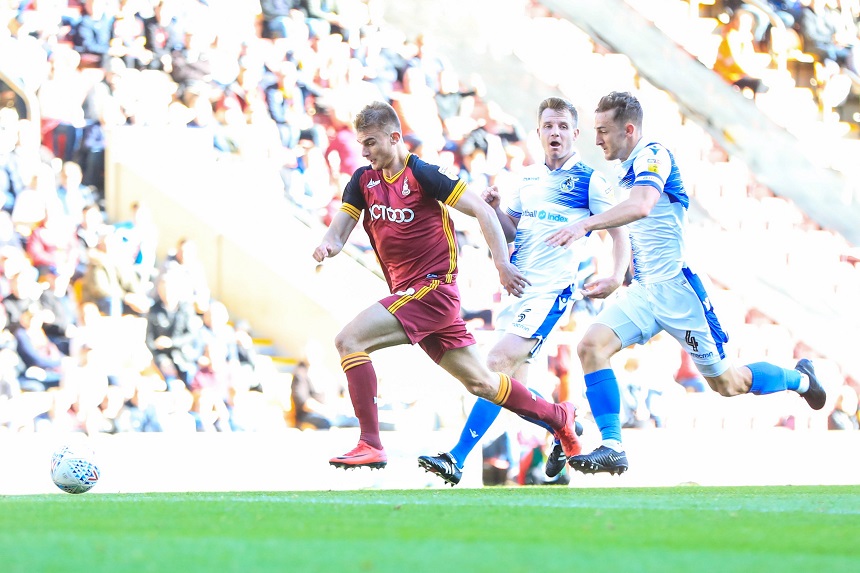 Rovers were forced to replace skipper Lockyer later in the half following an earlier clash of heads with Miller, but they still managed to create a couple of decent chances ahead of the break.

Stuart Sinclair fired wide from the edge of the box following Joe Partington's low ball into the middle.

Ollie Clarke then forced O'Donnell into a save with a swerving shot from distance shortly before the interval.

Five minutes of additional time came at the end of the first period - partly due to the stoppage for Lockyer's head injury - with Jim O'Brien and Michael Kelly both causing concern to the opposition goalkeeper with testing crosses.

There was still actually time for City to engineer once final chance before the interval, but an unmarked Miller headed wide from close range following Scannell's cross from the right.

Miller's blushes were spared, though, by the linesman's flag.

Miller and Scannell combined again minutes after the restart; this time the former firing narrowly wide of the far post with an acrobatic volley from the latter's cross.

It was a great effort from the hard-working striker, and only inches wide of the far post.

Hopkin was looking for City to keep the pressure on, and the Scot introduced Payne into the action off the bench for Gibson five minutes into the half.

Payne saw a strike from the edge of the box blocked soon after, but arguably City's greatest chance of the match came around in the sixty-fifth minute. 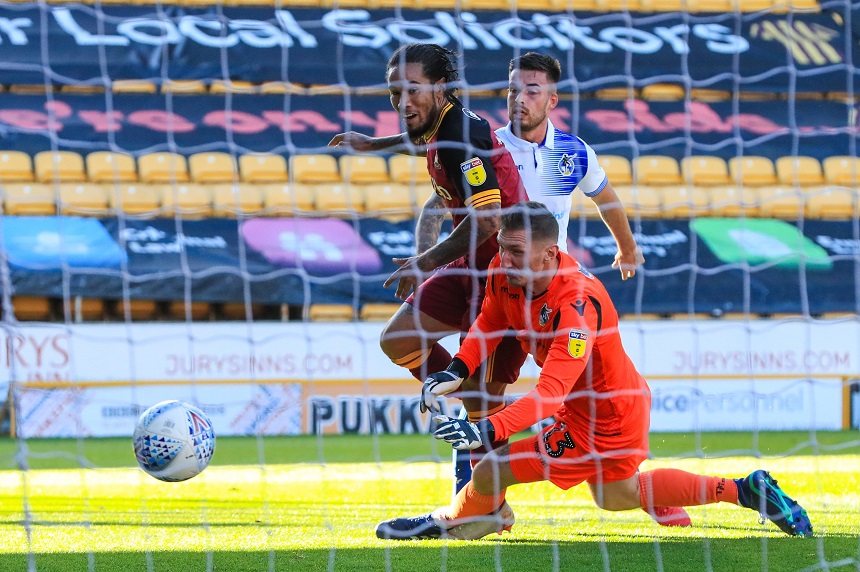 A delightful ball over the top from Jim O'Brien saw Scannell in behind Rovers' defence.

Scannell's shot for goal crashed against the inside of the near post.

Doyle went to fire home the loose ball on the rebound but his effort was blocked on the line by Craig.

The block by the former Millwall centre half appeared to come via his out-stretched left arm but no penalty was given.

Despite protesting for a spot-kick, Doyle was still able to tee up Payne but the sub's shot from inside the box sailed over.

Coming on the back of a strong penalty shout at Doncaster Rovers last weekend, the turned down appeal was yet more recent spot-kick frustration for Doyle and the Bantams.

City kept coming, though, and Lewis O'Brien saw his efforts to get a shot away in the box following a Scannell cross scrambled away by a couple of Rovers defenders.

Connor Wood and Payne combined to work the ball into the area, with possession eventually falling into the path of Miller via Doyle.

The striker turned away from Kelly and fired past Bonham but his celebrations were cut short by the linesman's flag.

After Kelly was booked for bringing down Scannell a yard or so outside the box just over ten minutes from the end, Payne forced a save from Bonham with an angled drive direct from the free-kick that followed.

Although City looked the more likely scorers at this stage, Rovers nearly snatched the lead of the contest soon after when they counter-attacked a Bantams free-kick deep inside their own half.

The ball was eventually worked to Rovers sub Liam Sercombe but his shot from the edge of the box was deflected behind as McGowan and Mellor flung themselves in the way.

The pressure wasn't completely over for City yet, however, as Rovers kept the ball alive from the resulting corner.

Sercombe fired for goal again from the edge of the box and a partially unsighted O'Donnell produced a great reaction save as the ball came through a sea of players.

Scannell, who was certainly a threat to Rovers' defence as City pushed for a winner after the break, saw a cross-come-shot pushed away by Bonham five minutes from the end.

Although City came closest to scoring on more than one occasion after the break, Rovers substitute Alex Jakubiak could have snuck a winner in injury time but his low drive was held by O'Donnell.

Match line ups, match stats and match action from the Bristol Rovers fixture can be found via the Match Centre - HERE.