David Hopkin's Bantams unfortunately didn't get the rub of the green at Doncaster Rovers on Saturday, as City were ultimately left to suffer defeat at the Keepmoat Stadium despite a battling effort against their in-form hosts.

After chances for both sides in the early stages, Doncaster - who started the day in fifth position - took the lead midway through the first period via a well-taken strike from John Marquis.

The Bantams started positively after the break - seeing a very strong penalty claim turned down after Eoin Doyle seemed to be barged in the back in the box - before Rovers doubled their advantage through Marquis seven minutes into the half.

With the home side's first meaningful effort on goal after the interval, Rovers' impressive number nine finished neatly past Richard O'Donnell after being played into space inside the box.

On the counter-attack, Malik Wilks could have sealed victory for Doncaster later in the half but the attacker fired wide from a good position inside the box.

City bounced back from that close shave and took the game to Doncaster, with Doyle firing against the inside of the post following a driving run into the box by Sean Scannell ten minutes from the end.

That near miss didn't matter as much barely sixty seconds later, however, when substitute George Miller beat Doncaster 'keeper Marko Marosi to a long ball over the top before finishing with some composure despite recovering home defenders on the line.

Hopkin's men forced a number of corners late on following Miller's goal, but they weren't quite able to find the equaliser their efforts on the day perhaps merited.

With a number of senior squad members still unavailable to Hopkin through injury, City's Head Coach kept with the same starting XI and bench from the home match at Charlton Athletic last time out.

Following the horrible news about Stephen Darby in the week, City's squad showed their support for the former Bantams defender by wearing special t-shirts with his name and number on during the warm-up. 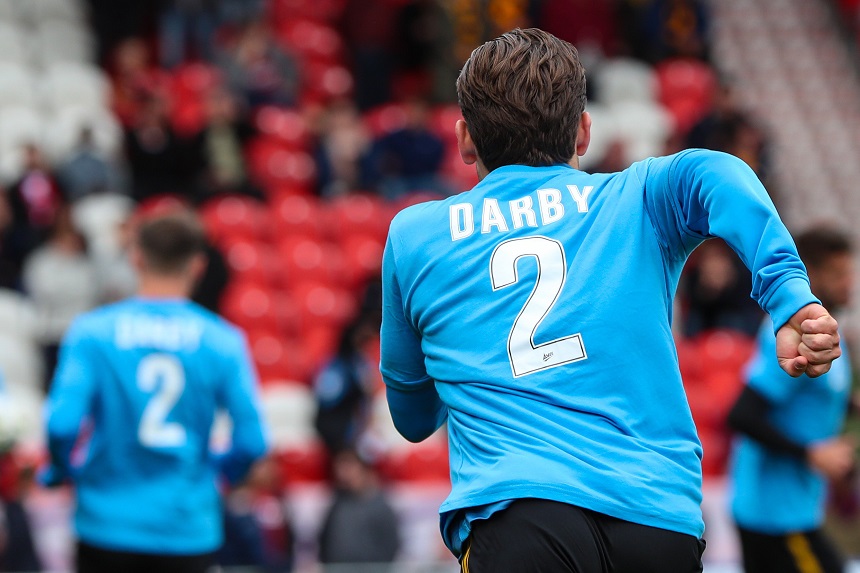 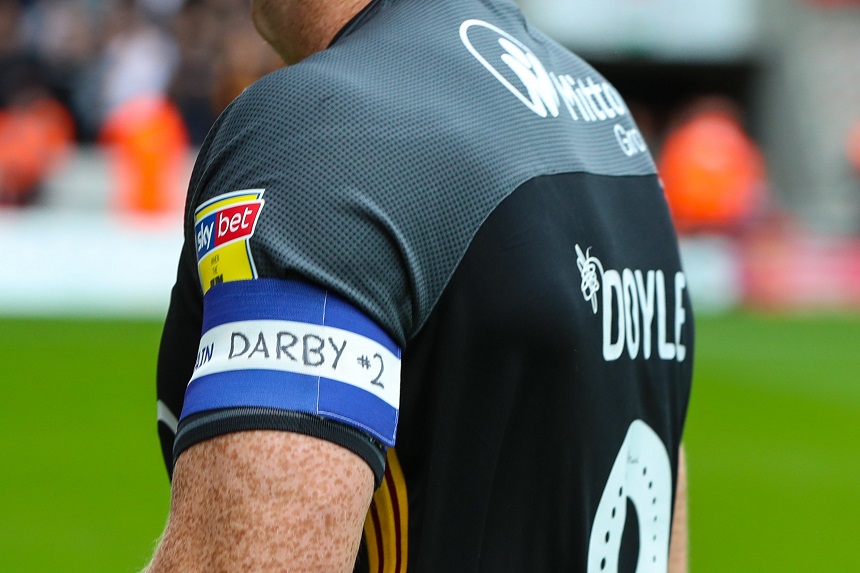 Doyle, who once again skippered City on the day, also wore Darby's name and number on his captain's armband.

Building on from an encouraging display against Charlton seven days ago, City began brightly against a side who had only lost once in the league ahead of the game.

Scannell saw a shot from inside the box in the very first minute blocked behind by Doncaster skipper Andy Butler.

From the resulting Jack Payne corner delivery, an unmarked Nathaniel Knight-Percival glanced a free header wide of the far post from a great position deep inside the box.

Any clear connection on the ball from the City defender surely would have resulted in a goal.

With two minutes already on the clock, City supporters gave a fitting rendition of the terrace chant 'Stephen Darby baby' for the popular Bantams old boy.

On the pitch, the Bantams continued their bright start to the fixture, with Doyle a whisker away from connecting with a testing Anthony O'Connor delivery from the right.

Connor Wood then won a corner seconds later on the far side. Three Bantams players tried to force a shot on goal from the set-piece that followed but Doncaster eventually cleared their lines.

After a purposeful start from City, though, Doncaster slowly came more into the contest as the half wore on.

Richard O'Donnell was on hand to make a save low to his left from Wilks in the eighteenth minute.

The City shot-stopper, O'Connor and Ryan McGowan were then all called upon soon after to make vital blocks from Matty Blair, Wilks and Marquis as the hosts kept the pressure on.

Another chance for Doncaster came soon after when Marquis got the better of O'Connor following James Coppinger's ball in from the right.

Marquis tried to turn the ball home from a tight angle but O'Donnell was on hand to push the effort past his near post.

Sadly, Marquis did get the better of O'Donnell and the Bantams defence soon after, though, when he was found in space around the edge of the area.

The experienced striker fired home with an eye-catching strike that beat the dive of the City custodian before finding the corner of his goal.

Although Doncaster had began to create chances leading up to the strike, the goal was little harsh on Hopkin's side, who had looked fully in the contest at that stage.

As City looked to respond from the blow, Payne fired wide of the far post minutes later after being found in the box by a low cross from Scannell.

With the game moving past the half hour mark, Butler saw a header repelled by O'Donnell following a wide free-kick into the area by Coppinger.

The free ball bounced out into Butler's path but the defender's diving header on the rebound flashed wide of O'Donnell's near post.

At the other end, City threatened themselves from a set-piece of their own shortly afterwards - O'Connor heading narrowly over the bar from a Payne corner.

Set-pieces continued to play a part as the first half drew to a close, Doncaster threatening through Blair and Wilks in quick succession from corners.

After Jim O'Brien was halted illegially just outside the box via a challenge from Ben Whiteman, play was initially allowed to continue before the Doncaster man was booked as City won a corner.

O'Connor and Knight-Percival tried to keep the danger alive from the resulting set-piece but Doncaster kicked clear in the end.

The half ended with O'Connor sending over a testing cross into the six yard box that flashed across goal with Doyle lurking in the middle.

As the interval passed and the second half began, Doyle was involved again within minutes of the restart in a controversial incident.

A cross from the right into the box by Scannell was flicked down into the path of Doyle by David Ball.

Doyle looked set to fire for goal from deep inside the area until he was seemingly barged to the ground following a shove from behind by Joe Wright.

Much to the annoyance of the City supporters behind the goal and the Bantams bench, though, no penalty was given and play was allowed to continue.

As Doncaster sprung forward on a quick attack, Marquis was played into space inside the area and the forward neatly finished first time past O'Donnell to put the hosts in the driving seat.

The goal was clearly a body-blow for the Bantams after a commendable start to the second period.

To City's credit though, they certainly didn't give in at this stage, and Butler was required soon after to clear behind for a corner following O'Connor driven ball across the six-yard box.

As City pushed for a way back into the encounter, however, Doncaster could have sealed the victory on the counter-attack in the sixty-fourth minute.

With the numbers in Doncaster's favour, Coppinger played Wilks through on goal and in clear shooting space, but the attacker fired wide of the far post.

In a bid to help City's efforts to get something from the match, Hopkin introduced Miller and Jordan Gibson from the bench.

Gibson saw an effort direct from a free-kick held by Marosi minutes later, while Miller had a half-volley on the turn pushed away by the Rover 'keeper as the game moved towards the final ten minutes.

The Bantams then came agonisingly close to pulling a goal back with their next attack through Doyle.

A driving run from Scannell eventually saw the ball land at the feet of Doyle inside the area.

The Irish attacker's shot for goal beat the dive of Marosi - but it also crashed against the inside of the post before bouncing away.

That piece of bad luck didn't deter the Bantams, however, as they did eventually manage to pull a goal back with their very next venture into Doncaster's area. 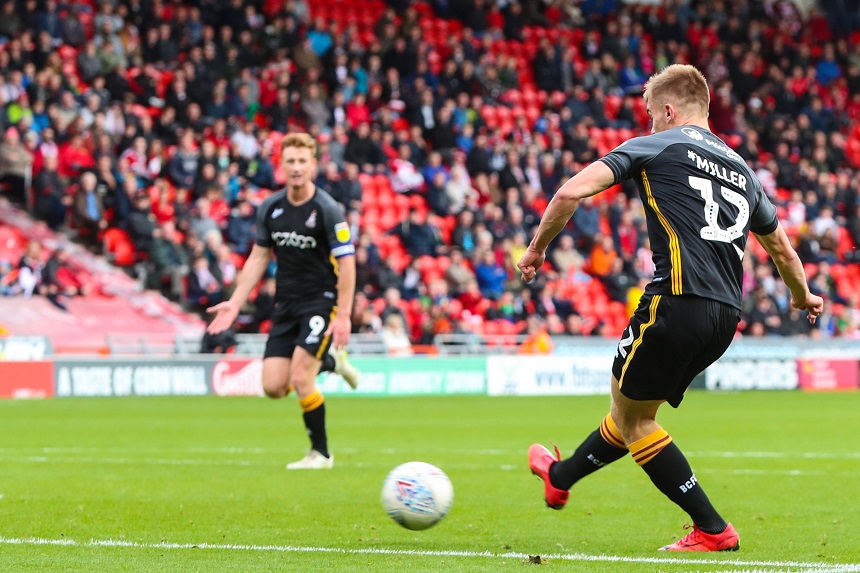 A long ball forward saw Miller get the better of Marosi inside the box. The sub striker still had some work to with defenders on the line, but he showed great composure to fire home.

In the time remaining - which included five minutes of injury time - City pushed Doncaster back, forcing corners and an opening for Gibson.

In the first minute of over-time, Gibson curled narrowly over the bar with a strike from just inside the box.

Gibson earned one last corner for City in the final seconds but his near post delivery was cleared.

Match line-ups, stats and action from the Doncaster fixture can be found via the Match Centre - HERE.