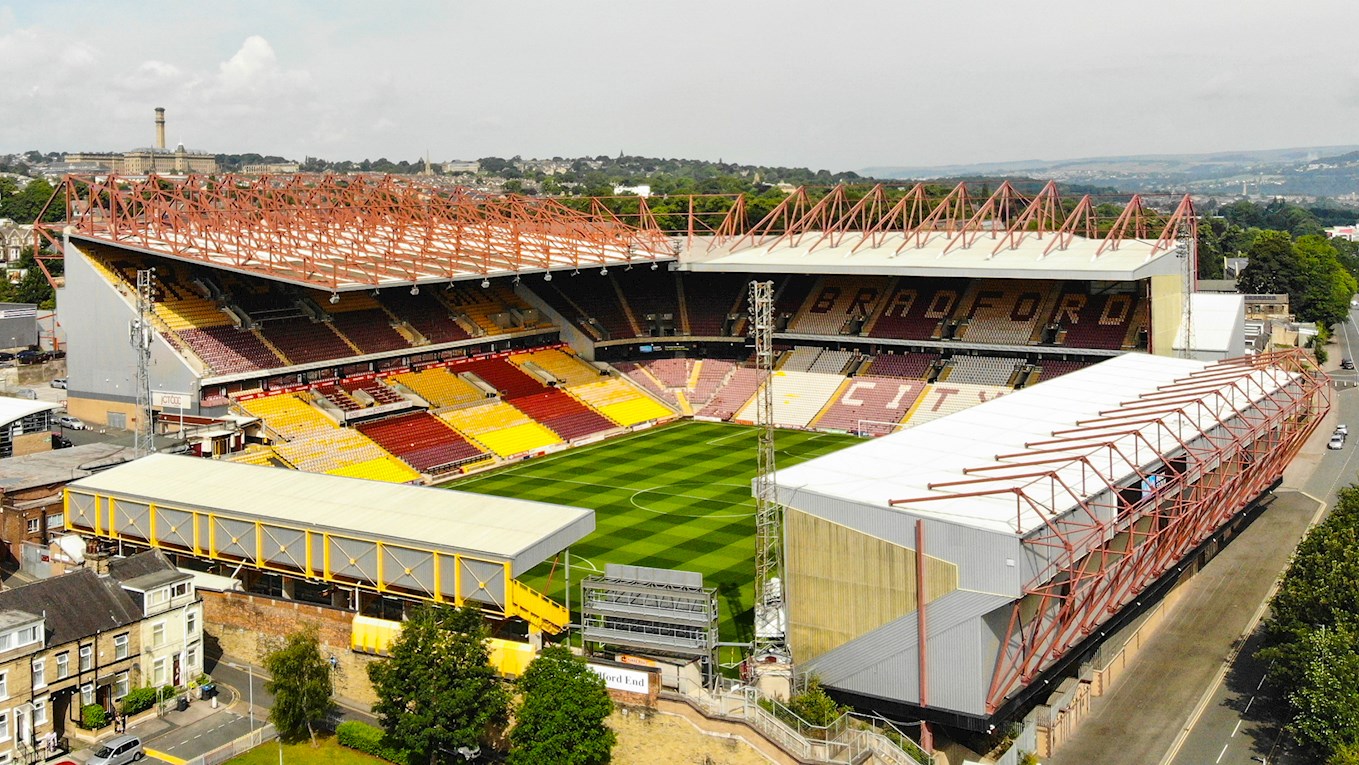 Built in 1886, the Utilita Energy Stadium was originally the home of Manningham Rugby Football Club.

In 1903, the code was changed from rugby football to association football and the ground became home to Bradford City.

The stadium is an all-seater venue and has a maximum capacity of 24,840.

The Mamma Mia Stand - situated on Midland Road - has one tier which houses both home and visiting supporters. It holds a maximum of 4,500 people.

The 'home end' is on the north side of the Utilita Energy Stadium and has a capacity of 7,392 spectators. The Kop is also home to the Bantams Bar, open to supporters on matchdays.

The smallest of the ground's five stands is situated at 'the Bradford end' of the Utilita Energy Stadium. It is a two-tiered structure holding 1,644 supporters. 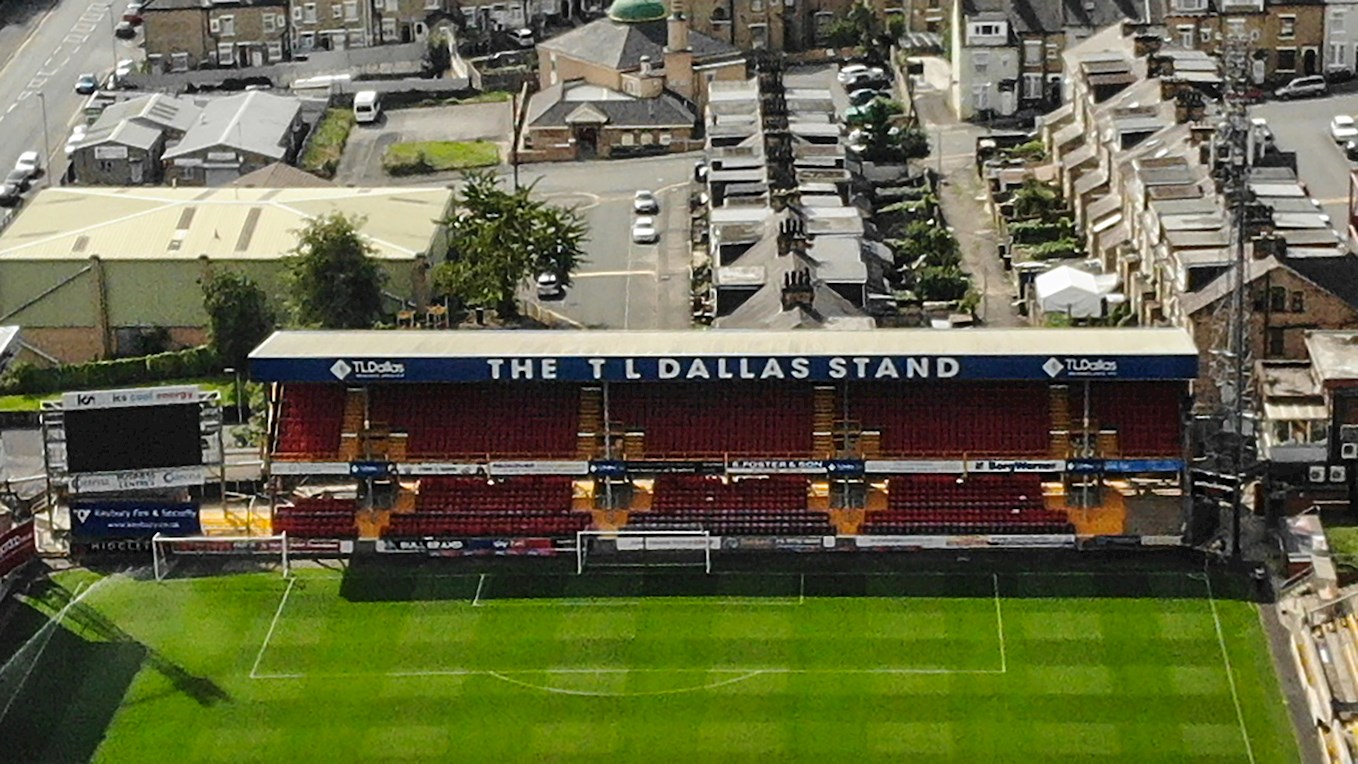 Having first opened in 2000, the Family Stand was launched at the beginning of the 2019/20 campaign and is situated between The Kop and the JCT600 Stand. Its two tiers hold 2,300 spectators.

Away supporters are housed in blocks F and G of The Mamma Mia Stand. Subject to away ticket demand, the TL Dallas Stand will also be open to travelling supporters. 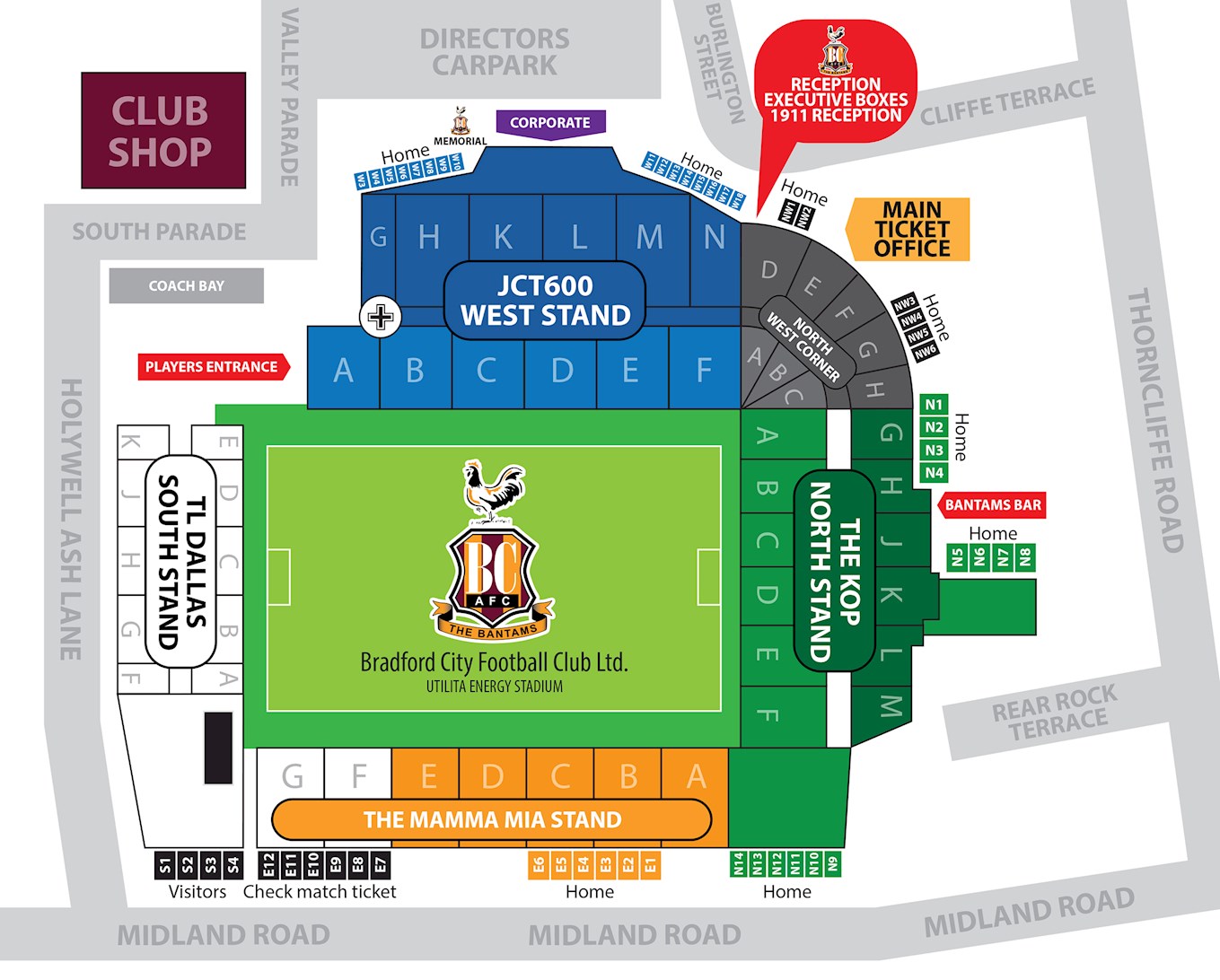 Supporters around the vicinity of the Utilita Energy Stadium can be sure to catch popular local entertainer David Nowakowski filming a new episode of 'Nova Meets' prior to the action kicking off, on most matchdays.

'Nova' is keen to get the views of both home and visiting supporters - on camera - as part of his light-hearted show which is aired via the club's social media channels in the days proceeding the game.

Younger supporters are also encouraged to keep their eyes peeled for the club's official mascot, Billy Bantam, who can also be found roaming around the Utilita Energy Stadium looking for the perfect photo opportunity!

Our 'Win The Shirt Off My Back' prize draw is held at every home matchday, allowing supporters the opportunity to walk home with the man of the match's match-worn shirt!

Tickets for the prize draw, made at half-time of each game, can be purchased for just £1 by sellers located in and around the Utilita Energy Stadium prior to kick-off.

Various parades, presentations and ceremonies are held during the half-time break of our home fixtures.

Supporters can catch the substitutes keeping warm and even ask them for an autograph or photograph!

The Shirt Off My Back winning numbers are drawn by one of City's substitutes on the day, while Bradford City Disability Football Club often grace the turf for a short match.

Kiosks are located in all stands inside the Utilita Energy Stadium, serving a wide range of meals on top of alcoholic, hot and soft drinks and sweet snacks.

There are several pubs and bars located near the ground.

Well-known amongst City supporters is North Parade - a street situated 0.6 miles away from the ground (approximately a 12-minute walk).

There you will find bars and pubs to enjoy refreshments before and after the match.

Approximately a 15-minute walk from the stadium is club partner and Italian family-run restaurant, Mamma Mia.

The city’s leisure centre, The Broadway, has a Taco Bell, Subway, Burger King and various other eateries and is also around a 15-minute walk away.

Located in the Forster Square shopping park is a Greggs, Costa and McDonald's.

Inside the Utilita Energy Stadium you will find an array of food kiosks, toilets, bookmakers and entertainment services to enjoy before, during and after the game.

The recently-opened Billy's Coop, found in the concourse of the JCT600 Stand, is the ideal place for younger supporters to relax and get ready for the match action before kick-off. 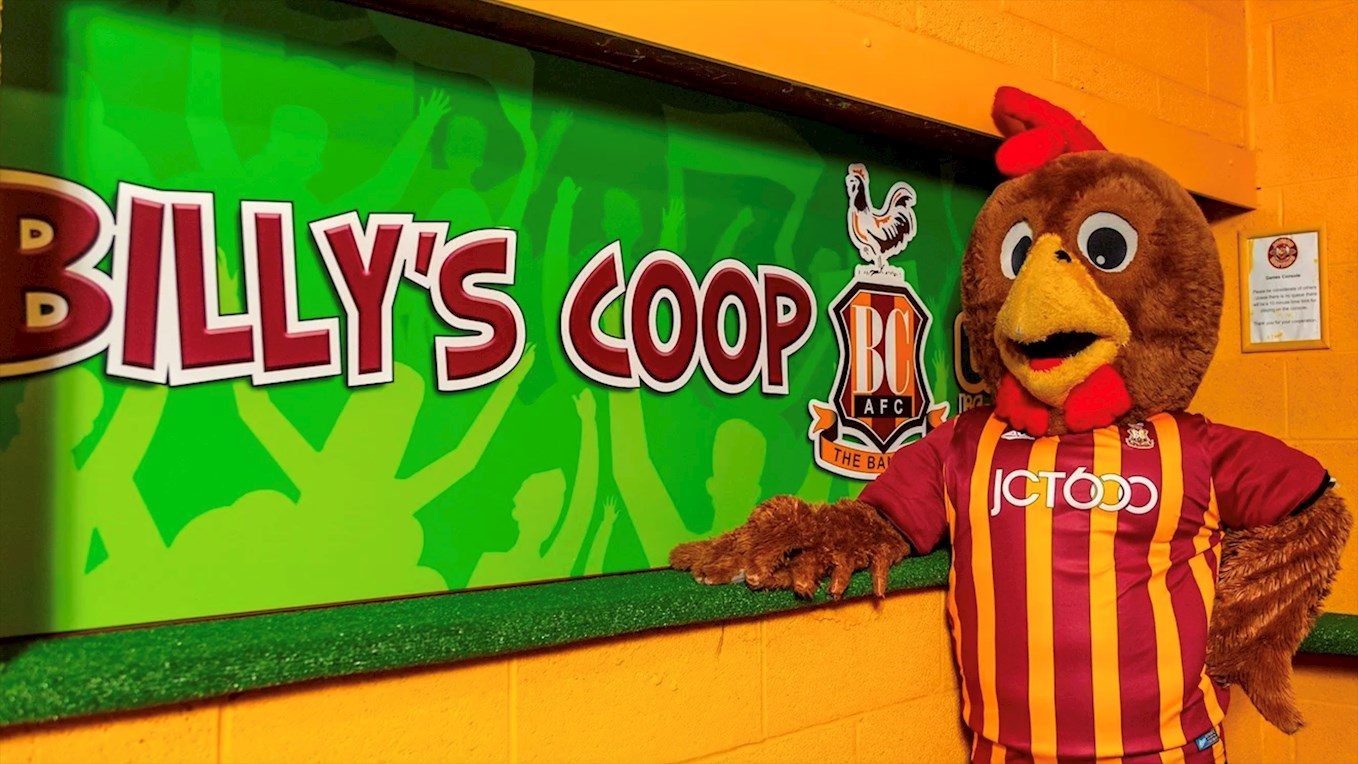 The Bantams Bar - located within The Kop at the Utilita Energy Stadium - is open before kick-off and after full-time for supporters wishing to unwind after the match.

Here, you will find a fully-licensed bar serving alcoholic beverages and hot food: the perfect way to meet up with friends and unwind on a matchday.

In various stands inside the ground, you will find William Hill bookmakers' stands for those who fancy a flutter on the action.

Stewards can be found in every area of the ground and are more than happy to assist you with any problems. 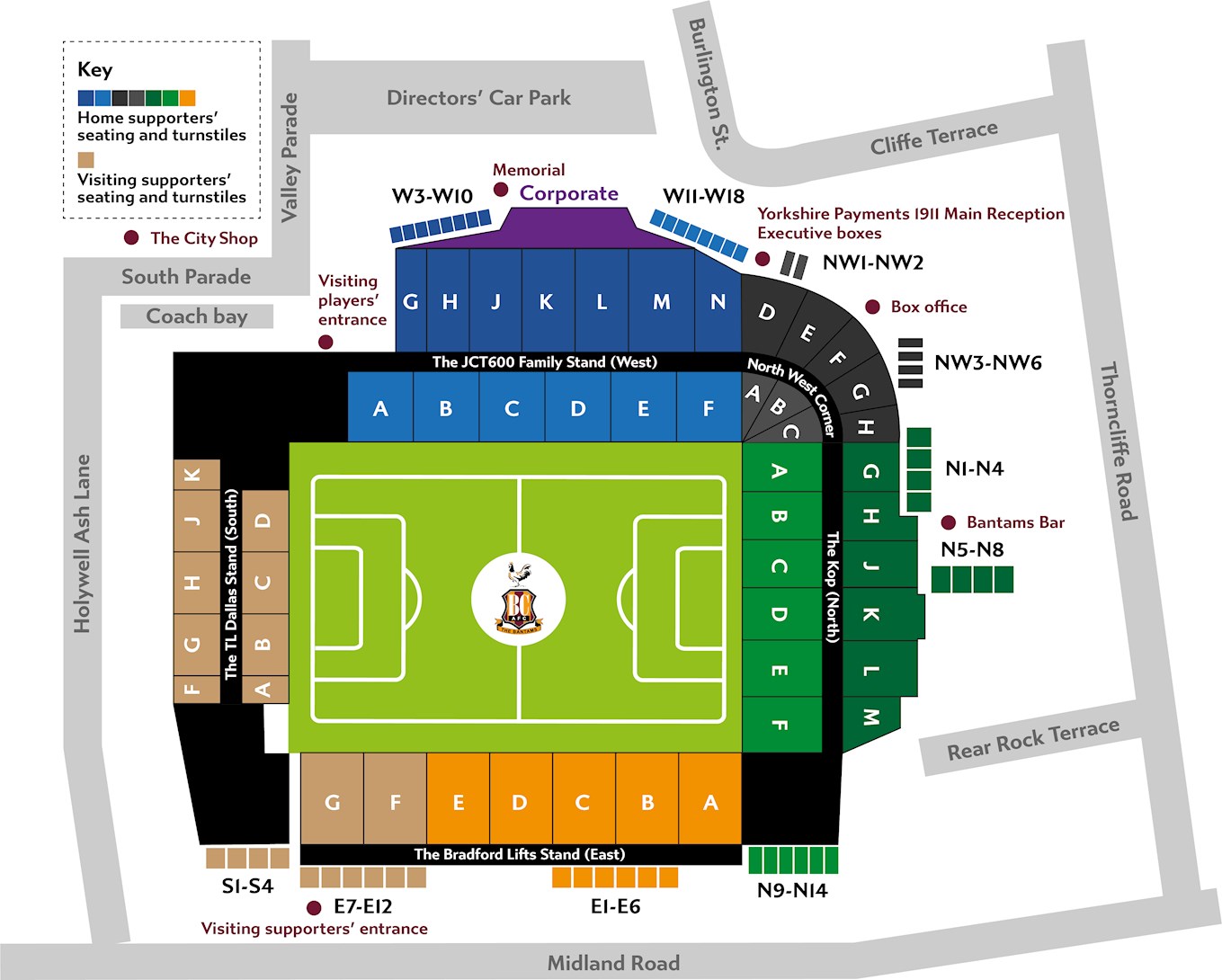 From the north east take the A1 southbound to join the A1/M1 link then join the M62 westbound.

From the south take the M1 or A1 northbound to join the M62 westbound.

From the north west / west take the M6 then the M60 towards Manchester.

Join the M62 eastbound from the ring road then exit the M62 from junction 26.

At end of the motorway take the middle or right-hand lane and follow signs for Ring Road East (under the tunnel) onto Rooley Lane (signs for Leeds Bradford Airport).

McDonald's is on your left. Go through the traffic lights at Asda Superstore and turn left at the roundabout onto Wakefield Road, staying in middle lane.

Cross two roundabouts staying in middle lane (following signs to Shipley and Skipton) on to Shipley Airedale Road (A6037) which then becomes Canal Road.

After Tesco and Smyths Toys Superstores (on the left) go through the traffic lights and turn left onto Station Road (A6177) and left again into Queens Road.

Continue up the hill to third set of traffic lights and turn left onto Manningham Lane.

After the Gulf Petrol Station (on your left), take the first left onto Valley Parade for the Utilita Energy Stadium.

The nearest railway stations for the stadium are Bradford Forster Square and Bradford Interchange.

Plan your route on rail by CLICKING HERE.

Plan your route by CLICKING HERE.

The stadium's postcode is BD8 7DY, with on-street parking available around the stadium.

Large stretches of Midland Road and Queens Road are generally used by supporters for matchday parking.

Parking on Midland Road is permitted for disabled blue-badge holders though, if parking in the vicinity of the stadium, be wary of various charges.

Bradford City prides itself on family vaues and making our club and matchday accessible and enjoyable for all - including families.

Supporters looking for a more family-friendly atmoshpere are advised to purchase tickets in The JCT600 Family Stand (West).

With the largest capacity inside the Utilita Energy Stadium, The JCT600 Family Stand offers great views of the action and - in the lower tier - easy access to the pitch for those all-important photo opportunities!

If you are unfortunate enough to experience any offence while at the Utilita Energy Stadium, please notify the nearest steward who will be happy to assist.

Should you feel, following your visit to the Utilita Energy Stadium, that the club could be more family inclusive and welcoming, we are more than committed to listening to feedback. Please contact support@bradfordcityafc.com via e-mail.

The two ways to purchase tickets for City's fixtures at the Utilita Energy Stadium throughout the 2019/2020 season are:

- IN PERSON - from the ticket office at the Utilita Energy Stadium.

PLEASE NOTE: We are no longer able to take card bookings over the telephone due to legislation, which governs how we store card details.

***when accompanied by an adult

PLEASE NOTE: FLEXICARD seats are selected on a game-by-game basis and are subject to availability.

Pre-ordered match tickets can be collected at the ticket office at the Utilita Energy Stadium.

If you wish to pay on the gate, prices are as follows:

Depending on away ticket demand for the fixture in question, travelling supporters may not be able to pay on the gate.

Whether supporters can pay on the day will be confirmed prior to the day of the fixture.

The City Shop is the club’s official retail partner. It sells the Bantams’ home, away and third kits and training wear as well as collectable items and gifts for all ages.

The City Shop is located on Valley Parade, opposite the directors' car park.

Both cash and card payments are accepted with various offers and sales - when applied - advertised across the club's official website and social media channels.

The club’s online merchandise website can be found by CLICKING HERE.

The City Shop's current, revised opening hours - in line with COVID-19 restrictions - are as follows:

*On home matchdays, The City Shop will close during the game and then re-open for a short period after full-time.

The Parader is the Bantams' official matchday programme, packed full of exciting content and exclusive interviews with players and the manager as well as fun games and quizzes for younger Bantams supporters.

The Parader is priced at just £3 per copy and is available from official sellers located around the outside of the ground. 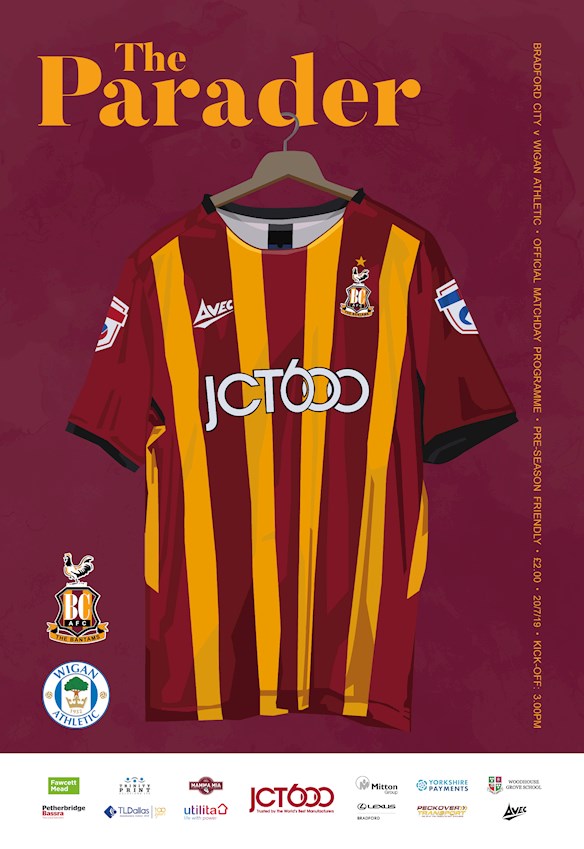 Half-time. ‘Win The Shirt Off My Back’ winner is drawn, birthday messages and club announcements.

All City supporters are invited for a drink in the Bantams Bar, situated in The Kop (North Stand).

Half-time. ‘Win The Shirt Off My Back’ winner is drawn, birthday messages and club announcements.

All City supporters are invited for a drink in the Bantams Bar, situated in The Kop (North Stand).

Bradford City is committed to extending football and the facilities at the Utilita Energy Stadium to the widest possible contingency of supporters.

Our club policies set out our intentions and procedures - to ensure the needs of all supporters are met.

Bradford City welcomes any opportunity to discuss its facilities with disabled spectators in order to improve the facilities it offers.

The voluntary role of disability liaison officer is carried out by Louise Lawrence.

She can be contacted by e-mailing support@bradfordcityfc.co.uk.